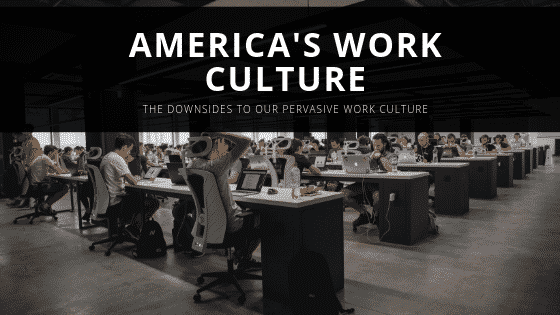 Americans are crazy (I can say that proudly, as an American). We have tons of pride in weird things and little to no satisfaction in essential things. “Wow, you worked 120 hours this week? You’re a rock star!” compared to “You stay home with the kids? What do you do all day?”. I struggle so much with this insane work culture in America. We are so freaking proud of working ourselves to death. Why is that? When did American work culture get so dysfunctional?

What is American Work Culture

We need to define American work culture before I start bashing it. In my opinion, Americans are in love with work. We don’t work to live – we live to work. We boast about our crazy hours, define ourselves based on our occupations, and look down upon others we feel don’t “work as hard.” The image of the hard-working all-American man is ingrained in our cultural psyche as something to aspire to. Being a hard worker is one of our nation’s core values.

American work culture is a messy heap of these ideas and values surrounding work. Our cultural norms praise work for work’s sake and scoff at ideals that would keep employees happy and develop a healthy culture about work.

Where Did This Obsession With Work Come From?

But the idea of the just world keeps many Americans trapped in the insidious work culture. If you genuinely believe that the world rewards good people and punishes bad people, you will work your ass off to prove that you are good and deserve rewards. Because if something bad happens, like you lose your job and can’t pay your bills, you must be bad.

Nobody wants to believe that they are bad, so they keep struggling, keep giving more and more, and keep accepting that they don’t have much to show for it. The worst thing about this is that they’ve bought into this culture so much that they refuse to vote for policies that would provide fundamental positive changes in their daily lives. Bad people don’t deserve help.

How America’s Work Culture is Hurting Us

If you haven’t noticed, this obsession with work comes at a tremendous cost to most Americans. We are overworked, underpaid, and stressed out with no free time. And the worst part is that we eat this up! We add ping pong tables to offices and call it a positive team culture while at the same time expecting employees to sacrifice every aspect of themselves to “foster corporate values.”

We need to stop it. We need to make a massive cultural change regarding work. And to prove why let’s look at two of the most significant ways our current culture is hurting people.

An enormous impact of American work culture is that it stresses us all out. Americans are riddled with stress-related illnesses (that we don’t have the proper healthcare to treat correctly, but that’s a different story!). Anxiety, depression, high blood pressure, and heart disease run rampant in our society. To be fair, I’ve done absolutely no research to try to determine if this is caused (even partially) by our obsession with work, but it seems highly likely to me.

Not only is working long hours stressful but being trapped in a job is stressful as well. You could argue that people “trapped in jobs” are lucky even to have jobs – and while it’s true that it’s great that they can support themselves, it’s also true that nobody should be stuck in an unhealthy work environment just so that they can survive. In the US, it’s all about the company and its bottom line. Workers are treated like replaceable cogs. Who cares if one breaks down and can no longer function? They will just get a new one.

Another reason for stress is that we are working so much that we don’t have the time to do anything to relieve it. Exercise has been proven to help reduce stress levels, but who has time for that when you are working 80 hours per week just to keep the bills paid? We also eat fast, unhealthy foods, because who has time to cook healthy meals?

This lack of time also leaks over into every other aspect of our lives and leads to a lack of social life and ambition. The standard retort to this stuff is just to work harder, increase your skills, side hustle, and do all these things to better yourself. But those helpful pieces of advice don’t consider the fact that there is not enough time in the day to do those things when you are stuck in a system that wants to work you to death.

Should people be forced to sacrifice the paltry hour or two they get at home each night to side hustles just to get by? Some people work so much that they are too tired to work on side projects when they get home, and some just want to spend the tiny bit of free time they have with their loved ones. And the worst thing is – this is frowned upon! Hustle Culture tells us that if we aren’t spending our entire waking lives working, we deserve to be poor!

This is so messed up. Our lives shouldn’t be about working so much that we have no time to enjoy anything. Life is for living!

Why is Our Work Culture so Horrible?

I know it sounds like I’m bashing Americans here, but I’m really not. I don’t think most people want our work culture to be this way. It’s turned into this mess because so many  Americans don’t have other options. It’s either give in to this abusive work culture or go hungry, break your back working for a company, or be homeless. What kind of choice is that? Of course, we will choose to get in line so we can survive. What other options do we have?

I mean, sure, we can try to better ourselves (but that’s difficult given the time constraints on our daily lives), and we can vote to change the system, but at the end of the day, we have to do what we have to do to get by. And for millions of us, that means embracing the American work culture.

We can go on and on about the problems apparent in America’s work culture. But instead, let’s think of ways to fix it. How can we improve the culture of work in America?

What is A Good Work Culture?

Before we can even begin to change the culture, we have to agree on what a good culture should be. What cultural values should we maintain in our work culture, and what needs improvement?

In my opinion, good work culture includes a work-life balance and decent pay for its employees. It’s also one where people are prioritized over everything else, and employee feedback is valued. It’s a culture where employee engagement is high because employees feel valued and supported.

One of the most important things we could do to change our beliefs about work is to find balance. That means more time off – whether in the form of shorter workweeks or more vacation time. It also means more flexibility in scheduling options. With so much technology available for remote work, everyone doesn’t need to be in the office at the same time every day. Why not let employees work remotely, come in later on some days, and leave earlier on others?

Balance is important because it gives people the opportunity to enjoy their lives outside of work. Having more free time to explore passions, spend time with family, or just take care of yourself would make employees more engaged at work and happier overall. This is a win for everyone.

Pay Needs to Keep Up

Another thing that would significantly improve our work culture is increasing wages. I mean, if you’re going to force people to be dedicated to their jobs, you may as well compensate them well for it. This would allow people to save more money and exit the workforce sooner. Wouldn’t it be great if the standard retirement age was lowered to 55 or 60 instead of raised every year? Wouldn’t it be nice if we celebrated people for working 30 years, then said, “you did great, now enjoy the rest of your life!”.

We don’t do that. The only option for retiring that early and enjoying the rest of your life is embracing the FIRE movement (which I’m obviously a big fan of). I think many people would choose that as an option if they could afford it.

But, we could also consider taking this payment away from work. We could institute a UBI that would give employees more options. Having just that tiny bit of breathing room to find better employment options would do a lot to alleviate the stress on American workers and change our work culture for the better.

But the best thing we can do to change our insidious work culture is to shift our mindsets towards people. Humanity is more important than profits. Workers are more important than the companies that they work for. If we start to put people first in everything that we do, we will see a shift in our culture towards that mindset.

And in reality, it’s not that difficult of an ask. We can start putting people first in our daily lives. Start being more empathetic towards retail workers and servers. It’s not their fault that their store won’t honor your coupon or doesn’t have your favorite product in stock.

Finally, we could demand reform. We could vote for policies that would help people. These would be things that give people options, like healthcare reform, tax policy reform, and social program reform. If workers had options, companies wouldn’t be able to abuse them.

Work Cultures in Other Countries

Before you say that instituting these things is impossible, or that spending all of your free time working is just part of life, look at what some other countries do. Many of our friends in Europe have policies that promote work-life balance and the happiness of their citizens over profits. It can be done if we want it badly enough.

It can go the other way as well. Japan has an even more drastic work culture than the US. Workers there also pride themselves on their insanely long hours and are expected to spend their “free time” socializing for the company. The Japanese work so much that it’s killing them, and they’ve even come up with a term for it: Karoshi. It literally means death by overwork.

Are there any upsides to American Work Culture? The only thing I can think of is the chance (or myth, as I like to call it) of making it big. The American Dream, as they call it. The opportunity to work so hard that you will eventually be well off enough not to have to ever work again. This myth keeps us engrossed in our work culture. It keeps the peasants on the bottom fighting for scraps and promoting a flawed system on the off chance that they too might make it to the top one day.

Honestly, though, I really can’t see any upsides to it. I’d rather we have policies in place that take care of our citizens first and allow everyone to pursue the lives that they are passionate about. What do you think? I’d love to hear your opinion!