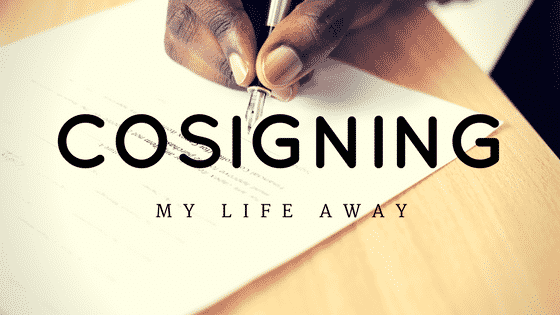 Today I’m writing a cautionary tale for all my readers (because it’s too late for me!). As you know from reading about the Worst Financial Decision of my Life, I cosigned on a car for someone when I probably shouldn’t have. But unfortunately for me (and please learn from my mistakes!), this wasn’t the only time I’ve cosigned. I haven’t even only done it twice. I’ve cosigned for stuff on three separate occasions!  And to be honest, I’m probably going to do it again (because obviously, I don’t learn).

The First Time I Cosigned

My first experience cosigning came about 11 years ago. I cosigned on a type of student loan for my then-boyfriend. We were getting ready to move from Illinois to California, and we didn’t have a lot of money. He was getting ready to start college, and we found a student loan program that would give us cash for tuition and expenses. He couldn’t qualify on his own, so I cosigned.

I don’t regret this one. We were together, and we needed the money. Having this loan helped us survive during our first year in California. I am a bit annoyed that it’s been 11 years, and we’ve only paid about 6K on loan, but it is what it is. On the plus side, we still get along well, and we are working together to pay it off.

Cosigning my life away for family

I don’t really regret the second time I cosigned either, even though I had to pay more than I intended. I helped my brother buy his house. He is terrible with finances (most of my family is) and has horrible credit, but he makes good money.  His wife had decent credit but worked a low-paying job. He could afford the mortgage, but with his credit score, he couldn’t qualify.

I have a little niece and nephew who mean the world to me. They are adorable little kids, and I wanted them to have a house to grow up in. I also love my brother. He was my best friend for the first 16 years of my life. I want him and his family to be happy.

So, I agreed to cosign. However, I only agreed under the stipulation that I would be a co-owner, not just a cosigner. The distinction is essential because it means I have an ownership stake in the house, whereas if I were just a cosigner, I would be financially liable, but I wouldn’t be part owner.

My brother swore up and down that he would always pay on time, and he wouldn’t do anything to hurt my credit. He promised not to screw me over. My brother may be a jerk sometimes (aren’t all brothers?), but he’s loyal to a fault and takes pride in keeping his word. So, I believed him.

How it screwed me

Unfortunately for him, this was around the time when I got the job offer for Savannah. That meant I was selling my house and buying a new one!

Imagine my surprise when I applied for a mortgage and was told my other mortgage was thirty days behind. That’s not something you want to hear!  I was livid!  I called my brother and cursed him out like crazy. My sister had my back, and she did the same.  He apologized and promised it wouldn’t happen again. I had to pay the one month that he was behind; because I wouldn’t be able to get a mortgage if I waited for him to pay it. I told my brother not to pay me back and not let it happen again.

So, of course, it happened again. In January, I checked my credit score, and the mortgage was late again. He gave me some lame excuse about the homeowner’s insurance being wrong, so they weren’t paying because they were trying to fix it. To his credit, he paid right after I called him out, so I guess he was telling me the truth (at least about having the money). It’s been a few months, and I haven’t seen a late notice yet, so hopefully, he will keep up with it.

The Third (and Worst Time) I Cosigned

I’ve told this story before (remember, the worst financial decision?). The third time I cosigned was on a car for Jonathan. Yeah, let’s sign my life away to someone I know is an alcoholic with absolutely no financial literacy. Great Plan, Melanie! The good news is that I’m the primary on the account, and he’s the secondary, so I do have some legal rights to the car.  He’s supposed to take over the payments starting in May, and if he doesn’t, I’ll have to “recover” the car from him. I’ll let you all know how that one goes!

You’d think I’d have learned my lesson by now. But alas, I probably haven’t. My sister wants to leave California for cheaper pastures. She’s also planning on taking my mom with her. They want to move someplace on the East Coast with a much lower cost of living. Great idea, right? Unfortunately, they suck with money too. My sister has terrible credit and owns her own business, so she has very little income to show. My mom gets by. There is no way that they will be able to get a house on their own.

They are family. My sister has stood by me when pretty much everyone else I’ve known in my life turned their backs on me. My mom is my mom. I have to help them if I can. So, although I know cosigning is a terrible mistake, it’s probably one I’ll make again. On the plus side, at least cosigning for a house gives me assets. I’ve got that going for me, right?

It Didn’t Come to Pass

Thankfully, my sister and my mom were able to get a home on their own, and I didn’t have to help them. They did ask, but by that time, I was screwed over so much by Jonathan that I just couldn’t fathom ever putting my name on something for anyone else ever again.

I guess I do learn, eventually.

2 thoughts on “Cosigning my life away”