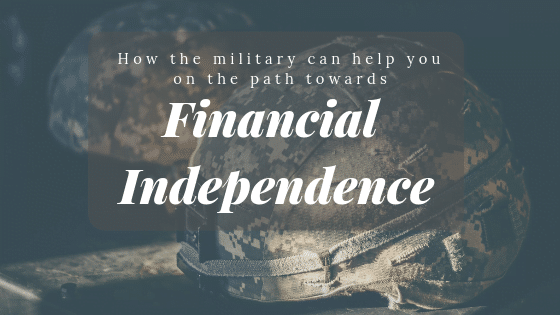 Joining the Military for Financial Independence

The military isn’t for everyone (hell, it was barely for me!). But it does offer many benefits, and if you do decide to join, these benefits can be a great boon to your quest for financial independence. Read on to find out if you should consider joining the military for financial freedom.

Although I didn’t realize it at the time, joining the military was a massive step towards financial independence. There is absolutely no way I would be in the economic situation that I’m in if not for the benefits I received from joining the military.

The best thing about this is that almost anyone can join the military and gain these benefits. I promise I am not an Army recruiter! But many people indeed feel like they will never be able to achieve financial independence because they don’t have a STEM degree, aren’t good at math, or can’t pay for college. There is a path if you are physically able and meet the age requirements, and that path is the military.

Full disclosure: I hated being in the military. It was fun during ROTC, but it got old once I got into the National Guard. There were too many rules, and I’m too much of a free spirit. Also, as I got older, I realized that a lot of what we were doing probably wasn’t right. I don’t blame the Soldiers for that, though. I blame the politicians who put the Soldiers into that position. But I digress.

Even though I didn’t necessarily enjoy my time in the military, and I don’t necessarily agree with how the military is being used, I still think it’s an excellent opportunity for people without many options to start working towards financial independence. If you join the guard, you make an extra few bucks every month (it’s the ultimate side hustle!).

Can you Get Rich By Joining the Military?

Let’s be honest. Military salaries aren’t that high. You aren’t going to get rich by joining the military and saving the traditional 5% of your income. The only way to make a good income in the military is to put in the time and move up in rank. On the plus side, the military tends to take care of its lower-ranking personnel by offering on-base food and housing, so your basic needs are covered.

The Benefits of Joining the Military

The military paid for my college education. I went the ROTC (Reserve Officer Training Corps) route, so the military paid for my tuition. Unfortunately, I still had to take out student loans for housing, but I graduated with only 20K in student loan debt, while most of my peers had over 40K. That’s a huge difference. The year I graduated, they changed the rules so that the ROTC scholarship could cover either housing or tuition, so if you can find a grant to cover tuition, you will be set! The military also offers fantastic educational opportunities if you decide to go the enlisted route. Check out the GI Bill for more information.

The second substantial helping hand my military service gave me was a VA loan. VA loans are exceptional. They are backed by the Veterans Administration and make it super easy for Veterans to buy a house. There are two huge advantages to using a VA loan. The first is that you don’t need a down payment. There is no possible way I could have afforded a down payment on a home in Southern California, even at the bottom of the market. Condos and townhomes were selling for above 200K, so I’d have to come up with 40 thousand dollars to afford a traditional loan! That’s a tricky thing to do for a twenty-something-year-old from a lower-middle-class family.

The 2.5-5% down payment needed for an FHA loan is more reasonable, but even that’s between five and ten thousand dollars, and when you add in closing costs, that gets unaffordable as well. Also, after the housing crash of 2008, the rules changed for FHA loans. Borrowers now have to pay Primary Mortgage Insurance (PMI) if they can’t come up with a 20% down payment, which sometimes makes the mortgage unaffordable.

Another big plus of the VA loan is that you don’t have to pay PMI, even if you don’t have a down payment! There is a funding fee that depends upon the loan’s value, but they can roll that into the mortgage, so you don’t have to pay it upfront. The VA helped me buy my first home with only ten grand up-front for closing costs. I wouldn’t have been able to do it without them.

Military service also offers an additional bonus that may help you gain financial freedom: healthcare. The VA doesn’t have the best healthcare, but it’s better than having nothing. I don’t currently use the VA for healthcare, and I actually don’t plan on using it anytime soon, but it’s nice to know that I have that option to fall back on.

These are the financial perks of military service that I have been able to capitalize on, but there are others as well, such as sign-on bonuses, retention bonuses, free job training, and Basic Allowance for Housing, to name a few.

Is Joining the Military For Financial Independence Right For You?

Although I hated my time in the military, I’m glad I did it. It gave me a hand up out of the lower middle class. It also benefited me in other immeasurable ways. I wouldn’t be the confident leader I am today without the experience I gained in the military.

I understand that the military isn’t for everyone. It is a lifestyle adjustment, especially on active duty and deployment. There are many physical, emotional, and political things to consider before joining. But it’s an excellent option for people without any other options. It’s a great path out of poverty and a great way to start on the road to financial freedom.

3 thoughts on “Joining the Military for Financial Independence”