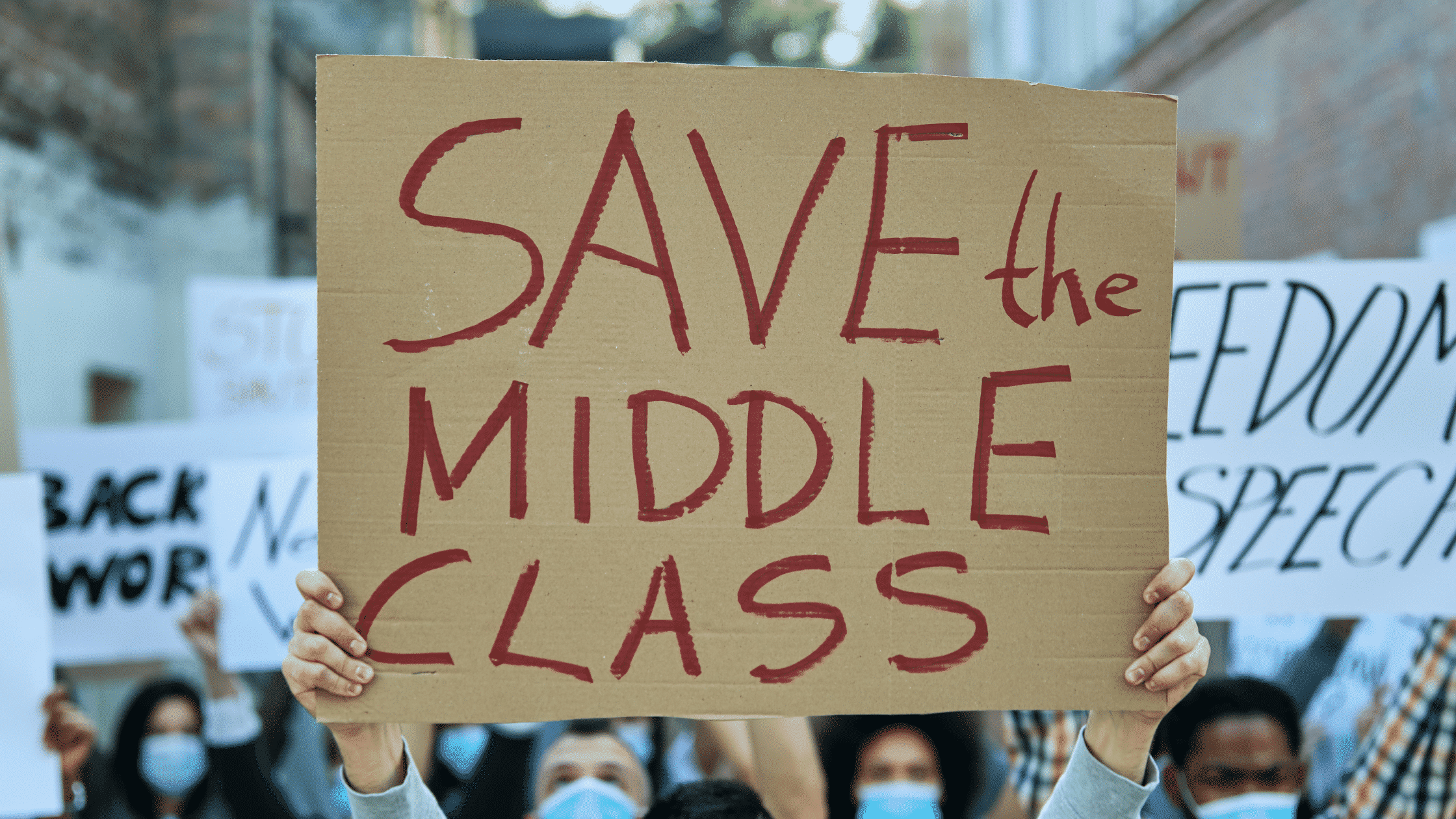 Isn’t the middle class where most of us aspire to be? It’s the house, the marriage, the single-family home with the white picket fence. Being middle class means summer barbecues, a two-week vacation every year, and traditional retirement. If the middle class is so great, why is there a middle-class trap?

I think of the middle-class trap the same way I think of the poverty trap. It’s an organized structure that keeps people in place. Although the middle class is doing better than the working class, they’re still just hanging by a thread, teetering on the brink of financial ruin. The pandemic has brought this to light in a big way, but it was always there, bubbling just beneath the surface.

The middle-class trap is an insidious snare of indentured servitude, debt, and escapism. On the surface, it seems like people stuck in the middle class are doing ok. They generally have most of the things that the American Dream told us people want – but at what price?

There’s Nothing Wrong With Being Middle Class

Now don’t get me wrong. There’s nothing wrong with being solidly middle class. I understand that if everyone ascended into the ranks of the upper class, the middle class would cease to exist. And a strong middle class is fundamental to a strong society. I’m not saying the middle-class trap is bad because it keeps people stuck in the middle class. That’s not what this trap does.

The middle-class trap keeps people teetering on the brink of ruin. Instead of looking upwards with a gleam in their eyes of what their futures hold, what opportunities their kids may have, folks in the middle are terrified of losing it all.

But There’s Something Wrong with Our System

One of my oldest friends is stuck in this trap. He’s married with two kids and makes a pretty decent salary, around 60K per year. His wife also works, but although she’s educated and has tons of experience, she’s struggled to find a career outside of early childhood education. That wouldn’t be a problem if that wasn’t such a low-wage field despite the exorbitant cost of daycare. They have a house, a car, and are able to afford decent things for their children. But they’re struggling.

They can’t afford to take a vacation once a year. Hell, he can barely squeeze in a day off without risking his job. He’s told me stories of working 21 days straight. His entire life is work – by design of his company. And he can’t just find a new job, he needs to feed his kids!

They haven’t saved a penny for retirement or for their kids’ college. It’s just not something they can afford. Both parents are still paying off student loans, making car payments, and it seems like property taxes go up every year, making their mortgage harder and harder to afford.

And of course, there has to be an emergency a few times per year. Cars break down, appliances break down, the roof starts leaking. Every time they think they will be able to get ahead, something like this happens, forcing them back into more debt.

Is It Their Fault?

I know some people reading this will say that it’s their own fault. They should have planned better before having kids. Or they should have worked harder to not have student loans. Maybe they should have saved up a bigger emergency fund before doing something crazy- like buying a home for their kids. Maybe, should have, blah blah blah. It’s incredibly easy to judge other people’s situations, to say they could have done this or that better. What’s harder is to take a step back and try to understand why so many people are stuck like this.

I know my friend’s story is anecdotal, but I’d wager that there are millions of Americans in similar situations. And it’s not because they all suck with money, or are poor planners, or should have done something better. It’s because there are systems in place that love to keep people trapped in these situations.

I’d love to say it’s because of systematic problems, but if you take a step back, you’ll see they aren’t really problems. The system is the way it is by design. There are structures in place designed to keep people trapped in their jobs. People stuck in the middle class are the best consumers. They buy crap they don’t need as an escape from their mundane lives. There’s no incentive to change it, to actually help the people feel safe and comfortable because they are doing exactly what the system wants them to do: working a menial job and buying stuff to fill the empty space in their lives – both of which puts profits into the hands of system architects.

In my opinion as an amateur (AKA wannabe with absolutely no credentials) anthropologist, there are a few structures in place that are keeping people stuck in this insidious middle-class trap.

Go to school, get an education – it’s the only way to make it in this world. Homeownership is your path to wealth. Do these things sound familiar? The problem with this is that these things cost money – and lots of it. Going to college is one of the most expensive endeavors of most people’s lives. Normal people who want to get ahead need to sign up for outrageous student loans just for the chance of making enough money to be able to pay it off in the future. Homeownership is similar – the cost of housing has skyrocketed over the years, especially in the areas with the jobs. This has led to insane amounts of consumer debt. The situation is untenable.

Debt repayment isn’t the only thing keeping people back. Although the experts keep telling us that inflation is low, we know better. A few years ago, I could budget sixty bucks a week for my groceries – and that was in California! It may have been a little higher if I wanted to treat myself that week, or if I needed to buy dog food, cat food, and kitty litter in the same week. But it was rare to have a weekly grocery bill of over $100. Nowadays, it’s harder and harder for me to stick to a $100 dollar budget – and I live in a low cost of living area!

I know that’s just anecdotal, but the reality is that the cost of living is pretty high for most Americans. The majority of the cost is healthcare, housing, and education, but it seems like everyday items are getting more expensive as well.

A high cost of living wouldn’t be so oppressive if wages kept up with it. Unfortunately, that’s not what happened. The minimum wage hasn’t increased in years. Real wages have actually declined over the past few years. With prices going up and wages remaining stagnant, it’s no wonder that the middle class is feeling squeezed. People can’t afford their basic necessities, and they lean on credit cards to help them get through the month. Which puts them right back into more debt.

Speaking of work – who thought it was a good idea to tie healthcare to employment? How many people would be willing to quit their miserable jobs if it didn’t mean their family would be totally screwed if anyone had a health emergency? Healthcare isa privilege given to only those who have decent jobs in this country. This keeps people trapped in those jobs and leads to another huge reason why the middle class is in trouble.

No Protections at Work

More than half the states are so-called “right to work” states, and yes, that is some 1984 doublespeak. It actually means workers have no rights. Businesses can fire employees almost on a whim – and it means union protections are sparse.

We usually talk about lack of time off and lack of worker protection when it comes to low-wage workers, but these structures affect the middle class as well. Middle-class Americans struggle to access paid time off for sick leave, parental leave, and even vacations. They are terrified of making waves at their jobs (i.e even trying to unionize) because they need their jobs – Not only for the healthcare that we just talked about but also to pay for the insanely high cost of living and to make payments to their debts. It’s not a sustainable situation.

How Do We Fix It?

I’m a pro at bringing up problems without having in-depth solutions. I don’t know how to fix all of the problems of the middle-class trap. I do think instituting a UBI, healthcare for all, and free access to higher education would help immensely.

But I also think that a lot of people are realizing how messed up the system is and are working on their own to opt-out of it. I truly believe that the FIRE movement is a result of the middle-class trap. People are realizing that they don’t want to be stuck in it, and doing whatever it takes to get out. I think we’re going to see a lot more of that going forward, and in my opinion, that’s a huge win. Maybe if enough people opt out, the system will be forced to change.

So I don’t really have any answers on how to fix this on a societal level, but if you’re stuck in the middle-class trap, check out the financial independence movement. Look into Passion Fire and see if something like that would work for you. It won’t be easy to accomplish, but it has to be better than staying in the trap.

Further Reading on the Middle-Class trap:

14 thoughts on “The Middle Class Trap”