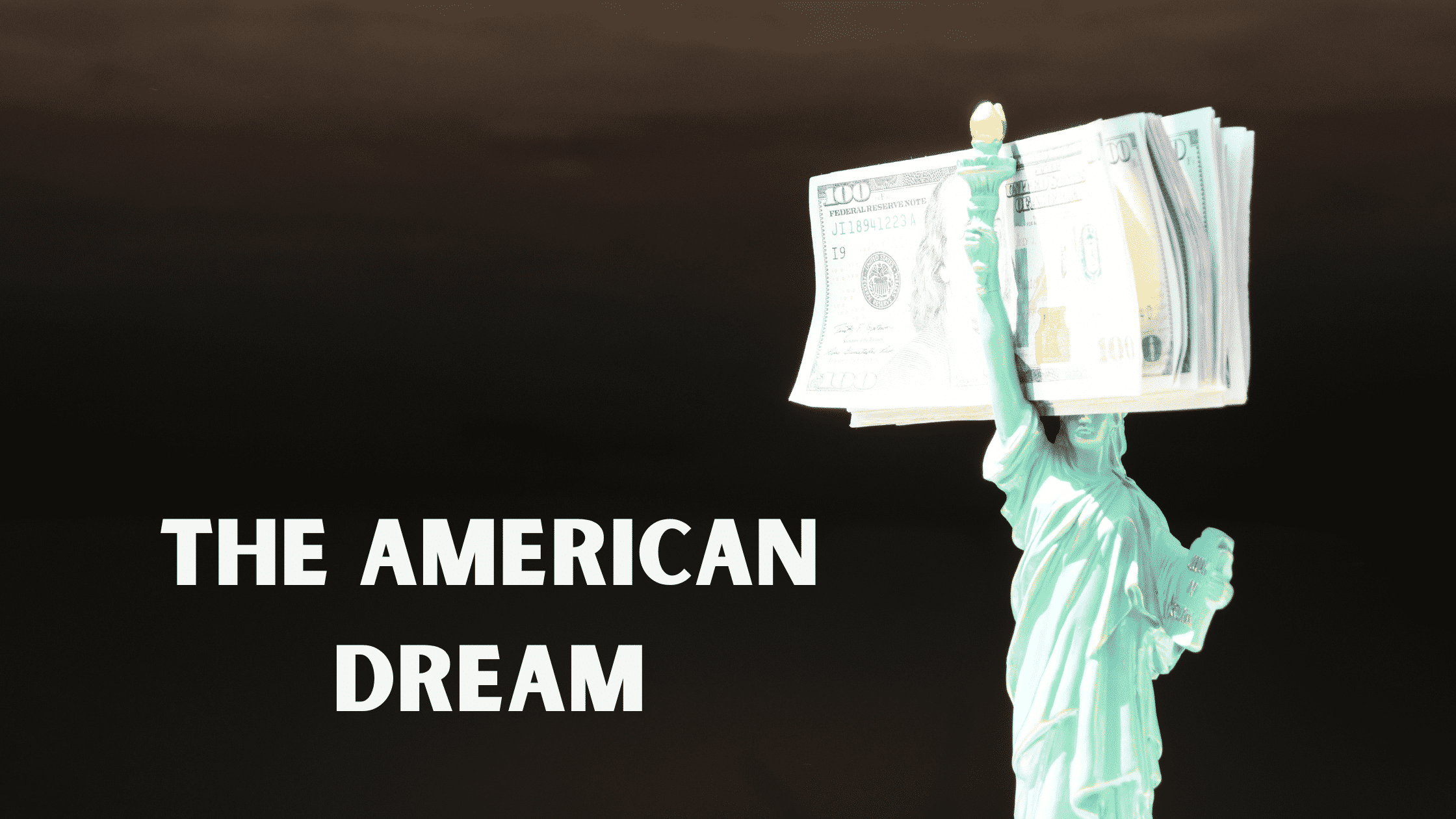 What is the American dream? Is it that white picket fence in suburbia with 2.5 kids, a dog, and a cat? That’s what the marketers have been trying to tell us, isn’t it? That we won’t be happy until we have our giant house filled with all of our things? When did acquiring more stuff become the measurement for happiness in our society?

I don’t know about you, but I think that being trapped in an insanely expensive mortgage seems more like a nightmare than a dream. The outside layer of the dream – that happy suburban couple – is just a cover. The reality is that the American dream is just a marketing ploy to get you saddled with a four-hundred-thousand dollar mortgage, two fifty-thousand dollar cars, and loads of consumer debt. The image of the perfect life is on display, but it’s just that, an image. Most people would have to drown themselves in debt to afford that version of the American dream. When did consumerism become the American dream?

Consumerism and the American Dream

Maybe I’m confused, and maybe I don’t understand the American dream correctly. But from what I’ve seen of it, it’s based on consumerism.  Buy this new shiny thing and you will be happy! This super expensive car will give you your dream life! You need the newest and fanciest gadgets in your house in order to be living the dream! And really, it’s all bullshit. None of that stuff will make you happy. It’s just stuff. Stuff that impresses people who you don’t even know and who don’t really matter to you. Why go through the effort?

Was it always like this? Was I just too young to remember it? It seems like the American dream isn’t real, it’s just a wild fantasy made up by marketers to get you to part with more and more of your hard-earned money. It’s a marketing ploy. And the crazy thing is, it’s working.

A 2015 study showed that the marketing industry made up a whopping 19% of the US GDP in 2014. That’s over 3.5 trillion dollars! And that was back in 2014 – I’d imagine that it’s an even greater number now. There’s a reason why companies spend so much money on advertising – it works! They wouldn’t spend that much money if they didn’t get a pretty hefty return on their investment. Their entire goal is to get you to want more and more and more. They sell you the dream that their products can provide you with some semblance of happiness, but is that really true?

What Really is the American Dream?

Is that the American dream then? Drowning in debt so we can buy the shiny crap they are selling us for fleeting moments of happiness? I don’t think it is. I think too many of us (myself included!) got caught up in the idea that these are the things that would make us happy.

The reality of the American dream is that it’s a consumeristic trap. People go into debt to buy all of those things that the marketers are pushing, and then they get stuck. They get trapped in the spiral of consumerism because it’s so difficult to dig your way out so why bother trying? People become stuck in the system – they work forty plus hours a week with minimal time off, all to afford this lifestyle that was sold to them as the dream. No wonder depression and anxiety run rampant in the United States. Most of us are living our lives with just the illusion of freedom.

But the truth is, you can’t be trapped in this system and claim that you are free. You aren’t free. You are stuck.

There is an Escape

Freedom is the Real American Dream

The real American dream still does exist – but it’s not what they are selling you. It’s freedom – the freedom to opt-out of the consumeristic culture that we’ve developed. For me, financial independence is the way out. Once I reach financial independence, I’ll be able to live my life for myself, rather than for whatever company I owe money to (banks, credit card companies, auto financers, etc). Just imagine what you could do if you weren’t being held back by financial obligations!

Do what Makes You happy

Don’t get me wrong- it’s not inherently bad to want all the things. It’s actually pretty normal! And you aren’t any less of a person if you chose to stay in the game and pursue all those fancy new objects. That’s your choice and I’m not judging it.

My biggest issue with it is that society has sold us this lie that that’s what we are SUPPOSED to do, and that’s just not true. We don’t need to buy all the things to be normal, happy people. We can pursue our passions, spend our time and money on experiences, and live our lives for ourselves. Companies wouldn’t make as much off of us if we all did that though, so that’s not what they are selling.

I guess the only advice that I want to leave you with is this: do what makes YOU happy. You don’t have to buy a new phone every two years because the screen is negligibly larger and all your friends have it. Buy a new phone if it will truly make you happy.  The same concept holds true for anything you are thinking of buying. Will that item really enrich your life, or are you just getting it for the image or because someone made you feel like you should?

Live your life the way you see fit, avoid the pleas of the marketers, and live your own version of the American Dream.

9 thoughts on “Is the American Dream a Marketing Ploy?”