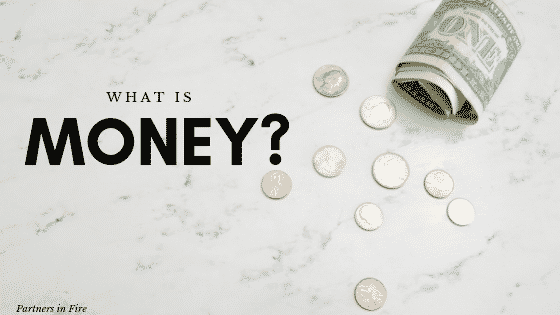 What is money? It seems obvious, doesn’t it? It’s those little treasury-backed notes with high-tech anti-counterfeit devices embedded in them. It’s also coins minted by the government. And, if you are into technology, sometimes it’s just numbers on a computer screen.

But I’m not talking about what money physically is, or even where it came from anthropologically (a step up from the barter system-done!). This is more of a philosophical question – what is money to you?

Money is a different thing to different people. I think that a person’s relationship with money has tons of variables – Culture, upbringing, class, political ideology – all of these things can contribute to what someone’s idea of money is.

Some people view money as power. This is incredibly true in our capitalistic society. We all know that there are big businesses that do their best to buy politicians and skew the system in their favor. They can do those things because money makes them powerful.

It’s not just corporations who let the power of money go to their heads. We need to look no further than the college tuition scandal to know that people with money sometimes use that money to get some type of advantage over others. Money can be used to gain a tremendous amount of power. But I don’t agree with the premise that money is power.

Another common viewpoint on money is that it is a status symbol. The ability to flaunt your riches by splurging on the latest new tech gadgets and the hottest new fashion trends is a tale as old as time. Everyone is always trying to impress everyone else – and having lots of money is one of the easiest ways to do that.

I’d argue that money as a status symbol is superficial at best, but nobody wants to listen to a finance nerd wax poetic on the pitfalls of materialism. That’s a post for another day!

I can definitely understand the viewpoint that money is life. In today’s society, you need money to survive. If you don’t have money, how do you eat? How do you put a roof over your families’ heads?

For far too many people, payday is a lifeline. Over 75% of Americans live paycheck to paycheck – it’s no wonder that so many people consider money to be life. For them it is. I think we can do better as a society, but unfortunately, we aren’t there yet.

What is Money to Me?

I don’t consider money to be any of those things. Money isn’t power, or life, or even a status symbol. At its core, it’s just a tool. And like most tools, it can be used for a variety of things.

Money is a Tool

How you view money dictates how you spend it. If you view money as a status symbol, you will spend all of your money trying to impress people that don’t matter. If you think of money as life, you will spend all of your money just trying to get by (I realize that’s a vast oversimplification, and tons of people don’t have much of a choice in that with our current system).

But if you view money as a tool, you can get it to do whatever you want it to do. You can buy the goods and services that you really need, but you can also buy investments that help make you more money. Or you can use it to enhance your life with experiences.

In my opinion, understanding exactly what money is and having a positive relationship with it is one of the first steps to gaining financial stability. I have this conversation with Brian on My Boyfriend Sucks with Money all the time – his relationship with money is definitely skewed. Although logically he understands that it’s a tool that can be used to his advantage, emotionally he can’t separate that from how he has viewed money his entire life – a combination of status and life.

How Do You View Money?

What is money to you? How has your relationship with money affected your life? And what positive changes might you be able to make to change how you view money? I’d love to hear about it in the comments!

3 thoughts on “What is Money?”