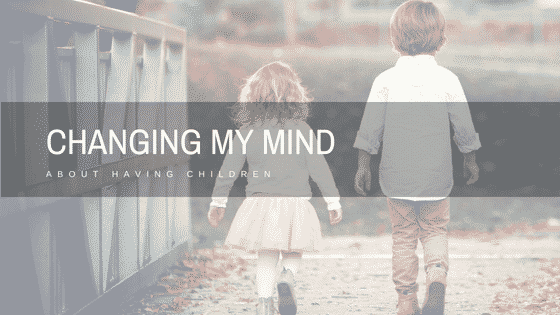 As most of you know, I do not have any children. What you might not know is that I’ve never really been inclined to have kids. For most of my adult life, it just wasn’t something that I gave any thought to. However, as I’ve gotten older, I became more and more against the idea of having children. By the time I reached my early thirties, I was adamantly in the child free camp. I even told people how much I disliked kids!

But then one day, something peculiar happened. I met my boyfriend’s daughter, and I fell in love. She’s an awesome little girl with a lot of personality and a lot of heart. I also saw how amazing he was with her, and got a taste of what it would be like to be a mother. She even called me mommy! And I’m not going to lie, I liked it. I liked it a lot. I started imagining what it would be like to have my own family, and to raise kids with this awesome dad. It’s something that I couldn’t stop thinking about.

I’m not foolish though, having a kid isn’t something I’d just rush into!  Especially after having been adamant about not wanting kids for so long. I definitely wanted to take some time to examine these new feelings before broaching the subject with my boyfriend. Do I really want my own child or could I be happy having his daughter part time? What about being around her made me want to have kids of my own? Why have I been so opposed to the idea of children?

Also, I had just started a new hormonal birth control, so I wanted to make sure that these new feelings weren’t a weird hormonal thing. I’ve had weird bad reactions to birth control pills in the past, so this definitely wouldn’t be out of the realm of possibility.  I thought about these questions at length (and had many girl talk sessions with my besties) to be sure that my change of heart was real and for the right reasons.

The Talk about having children

After a long examination of my feelings and waiting out changes in my hormones, I broached the topic with my boyfriend. He was shocked to say the least. I had always made it clear to him that I did not want children. However, after the initial shock wore off, he said that he was completely awed at the way I interacted with his daughter. He also thought that I would make a wonderful mother!

His only stipulation is that we get married first, to give our future child(ren) a sense of stability. He hates that his daughter lives so far away, and that he doesn’t get to see her very often. He didn’t want to have more children because he didn’t want to put another child through that separation.

I totally understand his hesitation on that, and I agree that getting married prior to having children is definitely the way to go (I never said I wanted to have a kid right this second anyway!). I am so glad that I wasn’t afraid to have this adult conversation with him, and that we have an awesome plan for the future now.

Plan for the Future

My boyfriend and I do plan on getting married and having children in the future, but nothing is set in stone. One of us may change our minds again or it may turn out that one of us is infertile. However, right now we are both totally into the idea of having a family. So, in order to celebrate that and to think about all the variables, I am dedicating the rest of this month to blog posts about having children. It’s pretty apt too, since it’s my ninth month blogging (I couldn’t have planned it better if I tried!). This month I’ll be discussing the possibility of not being able to have kids, how kids will change my FIRE goals, why I was so child free in the first place, and any other topics on having children that comes to mind. I hope you enjoy it!

One of the most common complaints I hear from the child free community is that people don’t respect their decision. People constantly belittle them by saying “oh, you will change your mind”. Yes, I was child free and yes I changed my mind. However, the vast majority of child free people do not change their minds, and I don’t want my one anecdotal experience to be used to belittle the life choices of others. So please don’t use my story to tell your child free friends that they will change their minds. They are not me, and they probably won’t. Thanks!

9 thoughts on “Changing My Mind About Having Children”