Kristina Marinelli is a is just beginning her blogging adventure. Her goal is to start writing about her own personal finance journey. This expedition started in an unlikely place – a household full of hoarders. Here’s her origin story, and how living with hoarders turned her into a minimalist.

I Grew Up Living With Hoarders – Now I’m a Minimalist

I lived in the back if my dad’s tiny television repairs shop until I was 7 years old. It was a cramped space –  I shared it with my dad, mom, both her parents, and one of her co-workers.  My mom arrived to the United States in her early thirties from a third world country, and a couple years later petitioned her biological parents to come live with us.  My mom’s parents had 5 kids when they were very young and they were dirt poor. Literally – their living room floor was soil, and my mom ended up living with her biological aunt as a child. I was told stories about my mom being raised without electricity and scarcity of food. The combination poverty and the lack of basic necessities led to a fear of scarcity, which is how I ended up living with hoarders.

We moved into our first house when I was seven years old. Everyone from the repair shop came with us, except my father, who had passed away two years prior. But, my mom’s second husband took his place, and his teenage son came along with him.

Everything from my dad’s television shop was moved into our new house, including contaminated junk, old broken television sets, VCR’s, miscellaneous useless tools, couches that were filled with dead roaches and their droppings, etc… Over the years, the house was filled with more useless junk accumulated from my Grandparents and my mom. They basically refused to throw away anything, as they thought it could be sent back to their home country or if it was broken it “Could be fixed.”   The realization eventually dawned on me: I was living with hoarders.

Their hoarding was contained to their bedrooms at first, then slowly trickled into the kitchen and various parts of our house. If anything was thrown in the trash my Grandma was quick to retrieve it, only to hide it in her room. I’d throw away old school work or my baby clothes, but my grandma would take it out of the trash to store it in her room, or it would magically re-appear in my room.  The fridge was always full, because even rotting food would not be thrown away. If I was bold enough to try, it would be dragged out of the garbage and placed back in the fridge. 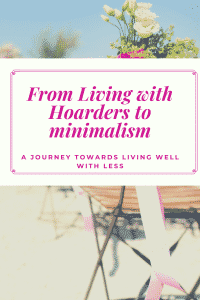 I tried to be neat and clean once I got my own bedroom, even from a young age. That was difficult with my living circumstances – my closet was filled to the maximum with apparel and older items that didn’t fit or that I didn’t want, simply because I wasn’t allowed to throw anything away. Unfortunately, newer, valuable items were stolen out of my room by either my mom’s co-worker, who was ironically an Ex-nun, or my step-brother.  I became sentimental and starting hiding valuables for keep sake or for my future house.  Living with hoarders was making me become a hoarder myself.

Learning to Live with Less

Upon moving away to college, I only took a large suitcase. At the time, I wished I could have taken more stuff with me. As the semester went on, I realized I could easily live with this amount and wish I could have done this at home. I wanted to purge my stuff, but couldn’t. Not as long as I was living with hoarders.

Three years into college, my mom was diagnosed with cancer, and sadly she died a couple months after the grim discovery. I inherited the house I grew up in along with all the rubbish that was accumulated for over thirteen years.  Oddly, enough I wanted to keep a lot of the junk for “sentimental purposes.” I think I caught the hoarding bug.

It was only after clearing out my grandparent’s room and part of the garage that I realized the monstrosity of the debris. I couldn’t believe how much garbage could fit into such little space. I found a company with the largest dumpster available, and the lady who worked there was surprised at my request.  “These dumpsters are usually used for major construction or demolition”, she insisted.

I informed her that is exactly what I need and paid approx. $400 to rent the dumpster. After filling that first dumpster to the brim, I needed to rent another smaller one just to finish the job.  I completely emptied the house of its contents and returned to college. Oddly enough, I was somewhat sad that everything from my childhood was thrown except for what was with me in my small apartment.

Two-years after graduating college, I moved from California to Massachusetts. At that time, I hired a moving company to ship my stuff, which cost about $1,500. Big mistake! A person who I admired told me that I had way more stuff than they did.

That statement triggered me and made me realize that I do indeed have a lot of old stuff. I was holding onto clothes that I didn’t wear simply because I didn’t want to throw them away or buy new wardrobe.  So, I took action.

It took about a year and half, but I purged everything except for my driver’s license and social security card. I became an extreme minimalist, and I thought I was weird because I didn’t know others lived like this. But, that didn’t even really bother me. I can safely say I don’t own anything from my childhood anymore, and I’m not even sad about it. I digitalized the photos of my family I wanted to keep and threw out the originals because some of them had smeared cockroach poop on them.

Since then, I’ve been moving around a lot from different states and cities, and each time I purge for a lighter load. Each time I move I try to get rid of as much stuff as possible.

One time, while moving back to the east coast, I sold almost all my one-year old Ikea furniture online, and got the buyers to haul it away from my apartment. With that stuff gone, everything I owned fit inside a medium sized SUV.

After that, I moved once more across the country. This time, I only had three suitcases and a couple of boxes. I lived out of a small backpack during the journey. Frankly, I couldn’t be happier.