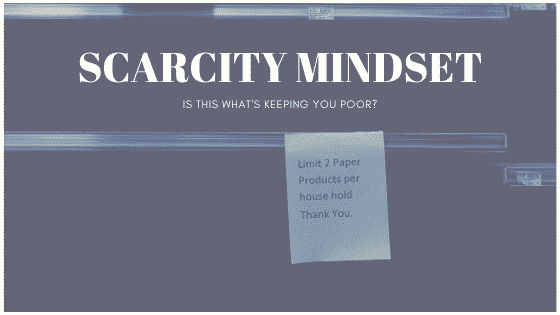 The Just World Fallacy isn’t the only psychological concept that works to keep you poor. A scarcity mindset does the exact same thing. And its often blamed for the bad decisions that the impoverished tend to make.

Although in many cases, a scarcity mindset really does work to keep people poor, the biggest proponents of this theory often claim that it’s the ONLY thing keeping you poor. I don’t think those folks are living in the same reality as I am. Yes, scarcity mindset is a real thing – but is alleviating the financial pressure really as easy as changing your mindset?

What is a Scarcity Mindset?

Before we get all philosophical in trying to answer that, let’s define what this scarcity thing is.

A scarcity mindset refers to the psychological process that takes place when people’s basic needs aren’t being met.  It causes your brain to panic and make choices based on the incorrect assumption that resources are scarce and you’ll never have another opportunity to do whatever it is that you’re considering doing.

People act differently when they aren’t getting what they need, and often in unexpected ways. Poor people buy junk they don’t need. Busy people procrastinate. People who are trying to lose weight binge eat.  All these counter-intuitive behaviors can be attributed to a type of scarcity mindset. When we are lacking something, it becomes the only thing we can focus on. We make irrational decisions which may soothe that need in the short term, but makes matters worse in the long term.

How Does It Affect Your Finances?

Money is scarce – and it seems like it’s gone once you get it anyway – so why not enjoy the tiny little break that you got? It’s not like you have access to a bank account to safely store it anyway. You know that if you don’t get that tiny luxury right now, you will never be able to get it in the future – so that short term planning mindset kicks in and you buy all the things. That’s the scarcity mindset at work.

I’m sure you’ve heard it. Change your money mindset and change your life! Ask the universe for what you want – and it will provide! Etc. etc. etc. This may be true for some.

I’m sure there are millions of people out there who make poor financial decisions because they have a scarcity mindset. If they changed their thinking, they’d be able to get ahead. Some of these people even realized it. They bought books, went to seminars, and changed their mindsets – improving their lives. I applaud those folks. It takes a ton of effort to realize that there is a problem with the way you think and make a conscious effort to change it. There are probably millions more who suffer from the scarcity mindset and don’t even realize they could escape if they made different choices.

I don’t think this tells the whole story. Although there are some that would benefit from a change in personal mindset, there are others who would not. Some people are trapped in poverty, and telling them to just change their money mindset is tone deaf at best. Our system really does work to keep people poor, and I think a big part of that is that we are experiencing the scarcity mindset at the societal level.

Scarcity Mindset at the Societal Level

I learned a lot about this when I read Andrew Yang’s book “The War on Normal People”. I’ve always understood the concept of scarcity mindset, changing your mind/changing your life and all that. But what I didn’t realize until reading that book is how it affects our entire society.

Some of the woes we have with our modern way of life are kind of because we, as a society, have embraced a collective idea of scarcity. “Who’s going to pay for it?” “But the national deficit” “We don’t have the money for that”. These are the common retorts I hear to any policy idea that would improve the lives of normal people.

And I don’t think these concerns are meant maliciously. People truly believe that there aren’t enough resources to go around, and that affects the policies they support and the way they vote.  They know the money has to come from somewhere, and the very real fear is that it will come from them when they can’t afford it.

How Can We Shift to an Abundance Mindset?

I think we, as a society, have to shift our views on this. Yes, some resources are limited – we will eventually run out of fossil fuels for example. But our ingenuity as a species knows no bounds. We adapt, overcome, and find solutions to the most pressing of problems – taking care of each other should be a no brainer. We just need to realize that we have the resources if we really put our minds to it.

It won’t be easy. It’s not easy to change even our personal mindsets – how can we expect a huge societal shift?

I think one of the biggest things we can do to change is to start the conversation. Read books like “The War on Normal People” and recommend them to your friends. Talk about how much abundance we actually have in our society. Share memes that reflect this type of positivity, rather than ones that reflect the negativity and fear of scarcity. The more people see it, hear it, and understand it, the more they will be willing to give it a chance.

Don’t get me wrong here. I’m not saying that if you are in a bad financial position, you should just throw up your hands and say “welp, not my fault, not gonna try”. It might not be entirely your fault, but that doesn’t mean you can’t do things to change your personal situation. Society may do everything it can to hold you down, but you can still fight back and rise against it on the personal level. Although I hope it does, I don’t think society is going to change any time soon. That means its up to us to do the best we can with what we have. And if that means shifting your personal scarcity mindset to improve your current situation, that’s what you should be doing.

But it’s also true that some people literally can’t change their situations – no matter how they shift their mindsets. Instead of blaming those people, we should be figuring out ways to help.

2 thoughts on “Is A Scarcity Mindset Really What’s Keeping You Poor?”