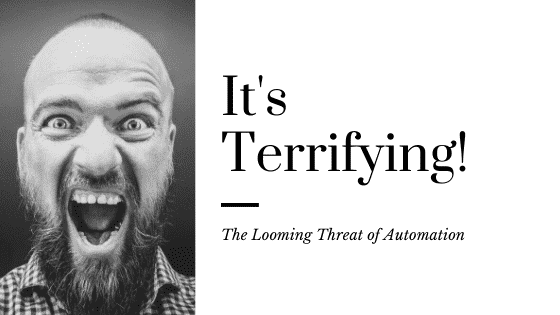 The threat of automation is often thought about as a futuristic crisis. It won’t affect us for the next twenty or so years, so why should we worry about it? Well, I hate to break it to you, but the fact is that automation isn’t coming. It’s here. And the technology for it is advancing at an exponential rate.

The Threat of Automation

Automation is threatening millions of jobs across a variety of industries.  We can see it in our everyday lives. Grocery stores have more self-check-out aisles than cashiers. Restaurants have introduced kiosks for ordering. Car companies are making strides with self-driving technologies. There are Teslas that will park themselves and pick you up at the curb at the touch of an app. And that’s just the bad news for valet workers. There’s so much more to see in our daily lives.

If we looked at manufacturing and distribution centers across the country, we’d see a similar trend. Machines are replacing workers everywhere, and the trend will only continue.

What Jobs Will Be Affected by Automation?

Most jobs will be or have already been affected by automation in one way or another, and not all of it’s bad. Automation has made tons of jobs immeasurably easier. Hell, even a basic calculator is an example of automation that has made accounting easier. There are thousands of similar examples with computers and software. Excel has made bookkeeping easier. Word has made report writing easier. And these are just the basics that we all use every day.

Unfortunately, making jobs easier sometimes results in lost jobs. If instead of taking 3 people 40 hours per week to accomplish a task, it only takes one person, that means two jobs are at risk of being lost.

Which Jobs are at Risk of Automation?

According to a report from CNBC last January, 25% of all jobs are at risk of having at least 70% of their tasks automated- which means that 25% of jobs are at high risk of being lost. Can you imagine what would happen if 25% of workers lost their jobs? For comparison, only 13% of jobs were lost during the great recession of 2008. Twice as many people are at risk of losing their jobs with the threat of automation.

That same study indicated that the sectors at highest risk for automation are in the transportation, food preparation, and administrative sectors.  We can see that ourselves with the tests of self-driving trucks, the aforementioned kiosks at restaurants, and all the fancy computer software that does our administrative tasks for us.

How is Automation Affecting the Economy?

It’s not all doom and gloom. Automation has been great for the economy so far. The stock market is at an all time high and has seen its longest bull run in history. Profits are skyrocketing. Wealth is increasing at historic rates.

But the affect on the economy and GDP is only one part of the story. The real question is how is automation affecting normal people? And that’s harder to determine.

According to Forbes, 2% of Americans lost their jobs between 2004 and 2009. Although the headline targets automation, the layoffs resulted from a multitude of factors, including global trade (and automation, of course). But the real story is in how these layoffs affected people, because that will help predict the effects of automation and the subsequent round of larger layoffs.

Losing a job has an extremely detrimental effect (who would’ve thought, right?). But when your job gets lost due to factors outside of your control, like automation, it’s even worse. It’s nearly impossible to get a similar role with similar pay if your entire sector gets automated away.  In fact, the people laid off between 2004 and 2009 saw a 17-30% decrease in wages when they found a new job, on average. Could you survive financially if you suddenly lost 17% of your wages?

But wage loss isn’t the whole story either. It’s also important to note the affects that this had on quality of life, and on the children of those who had lost their jobs. This group has a higher incidence of depression and marital problems than people who were not laid off. And their children have a 15% greater chance of having to repeat a grade – as early as in elementary school! As you can see, job loss has an incredibly detrimental affect on the whole family, and when it affects millions at once, on society as a whole.

What Percentage of Jobs Have Been Lost to Automation?

The percentage of jobs already lost to automation is difficult to estimate. There are tons of other factors, including the strength of the economy, trade, and supply vs demand. But there is one study that shows the loss of jobs in the manufacturing sector from 1980-2010, which was a staggering 7.5 million.

According to the study, manufacturing productivity actually improved during that time frame. How can productivity improve with so much job loss? The logical answer is automation.

How Do We Stop the Threat of Automation?

If you got this far, you probably think I’m all doom and gloom and want to ban companies from automating, for the good of the workforce. After all, the threat of automation is destroying jobs and people’s lives along with it.

But that’s not the case. I’m a huge advocate for automation. I think we need more of it. What needs to change is not automation, but how our society views work. I’ve already written an entire blog post on our insidious work culture, so I won’t go into a lot of detail here, but our obsession with work for work’s sake is driving a lot of these problems, and I think that there’s a better way.

What is the Way Forward?

As I said above, automation is leading to record profits and the strongest economy we have ever seen. Why not let all Americans share in this bounty? Of course, I’m talking about a Universal Basic Income, or UBI.

It’s not as far-fetched as it seems. Even a major candidate in the upcoming election is talking about it (to be fair, I wrote my posts on why I support UBI before I even heard of him!)

Universal Basic Income would basically eliminate the threat of automation. People wouldn’t have to worry about being homeless and hopeless if they lost their jobs. UBI would give them the ability to survive if they were forced to take a 15% pay cut, or were out of work for an extended period of time.

The best part is that the future would look more like the Utopian paradise that we envisioned with the advent of technology. We’d actually have leisure time to pursue our passions rather than waste all of our time at a grueling job we hate just to survive.

Automation is only threatening because of the resulting job loss. But if we redefine what it means to live and work in a society, we will realize that automation isn’t our enemy. It’s our key to living in a society that promotes humanity for humanity’s sake – and I think that’s a beautiful thing.

4 thoughts on “The Threat of Automation”