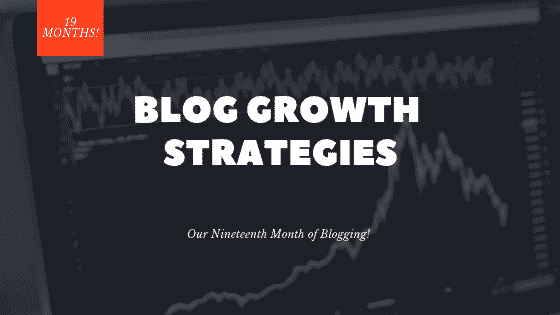 Welcome to our Nineteenth month update! Partners in Fire has been around for over a year and a half now, how crazy is that? We had about 1900 users during our nineteenth month, a very slight increase from last month.  But as they say, slow and steady wins the race, right?

Our readership is growing slowly but surely. We only saw a growth of 100 users this month, but it’s something. It’s basically the same growth we saw last month. I was hoping that it would start to be exponential at some point, but it’s not there yet. Does anyone know where I can get some of that exponential growth?

One the plus side, we only had a handful of days with less than fifty users this period. We even had three days with over 100 users, which is pretty great. On average, we are getting between fifty and sixty users per day.

Social Media was still the top driver of traffic to Partners in Fire during our nineteenth month. Pinterest was the clear winner yet again (seriously, you need to get Tailwind!), but Twitter and Facebook are still bringing in consistent traffic.  In total, we had 1,015 visitors from social media this month.

Pinterest continues to be our top social network.  The biggest traffic drivers are still older pins – I set them on a loop using Tailwind and I think that’s greatly increased my reach. I love it, and if you aren’t using it yet you can use my code to get one month free!

Click here to get one month free on Tailwind

Overall, we had 645 users coming to the site from Pinterest, a slight increase from last month. My goal is to get over 1K per month coming from Pinterest, but I know that’s a few months out. Designing better pins with Canva and Design Wizard will really help me get there though!

Facebook was my second biggest driver of traffic from social media this month. I had nearly 200 users reading my blog from Facebook! This was a fluke though. Most of these users were my family and friends who were curious about the breakup, and how I was going to move on from it. I wish they were that dedicated to reading my blog all the time! But it’s nice that they show up when I need the support the most.

The third biggest driver of traffic from social media this month was Twitter. Partners in Fire had 173 users from Twitter this month, which is a huge decrease from last month.  I expected that though – I also had a lot of support on Twitter from my break up. But those numbers were recorded at the end of May, because my Twitter friends about it before my Facebook friends did. It’s weird that you can be more open with your internet friends than you can be with your real friends.

My experience with Facebook and Twitter these past two months has really proven how personal stories resonate with people. I’ve always struggled with writing emotions, but I think I will work harder to make my posts a bit more personal. Showcasing the human story behind the blog is difficult at times, but I think a lot of readers respond positively to it.

Organic search was our second biggest driver of traffic during our nineteenth month, but unfortunately it continues to trend downwards. We had a total of 417 users from organic search this month, which is a decrease from last month. Why are our organic search numbers continuing to decrease?

I wrote a lot last month about the reasons why our organic search numbers were decreasing. I hypothesized that it could be seasonal – people were outside doing stuff instead of searching for things on the internet. My trends on this continue to be the same – I see the most traffic due to organic search on Mondays and Tuesdays.

My other theories included that I wasn’t updating my old posts enough (which I still failed at) and that I didn’t do anything else to increase my page speed (yet another failure). I’m going to give myself a pass though. I had a rough month, and I think it was an achievement that I was able to stick to my posting schedule!

One thing that I did do this month that I know decreased my views from organic search was delete a blog post. It generally got around 20 views per month via organic search, but it was a negative review of a company, and I no longer feel that content like that is appropriate for this website. I’d rather remove it now and lose a little search traffic than keep it.

We had 350 users come to our website via direct hit during our nineteenth month, which was basically the same as last month. Thank you, subscribers, for always reading when you get a post in your mailbox! If you aren’t subscribed yet, what are you waiting for? Sign up today!

We published some amazing content this month. I wrote another personal post-break up post about what my plans are moving forward, which is a pretty positive wrap up and look towards a better future (for both of us, really). Writing that last post really gave me a sense of closure, and I’m excited to see what the future will hold.

In addition to that, I wrote two awesome posts on Coast Fire. One was a general article on what Coast Fire is, and the other was more specific. It gave realistic numbers on what reaching Coast Fire might actually look like. If you think you are getting close to that awesome milestone, you should check it out!

Partners in Fire also got a bit philosophical this month. We published two op-ed style posts on overarching financial topics – being a female breadwinner and not judging someone on the job that they do. I love delving into big picture topics that discuss the need for societal change, and I love creating discussions around these topics. Financial basics are fun, but I think more people will be helped if we change financial policy. And the first step to changing the world is to start a conversation about the issues!

I discuss monetization every month, and every month it’s the same story. Monetization isn’t quite working out for me yet. But I’m still working at it! When I get it figured out, there will be a huge celebratory blog post about it, I promise!

I know that I need to get my page views and sessions up before I can make any real money on the blog, so that will continue to be my focus. If I build a blog that appeals to a ton of people, the money will eventually follow. At least that’s the theory.

If my super honest blogging chronicles have motivated you to start blogging, start with Bluehost for as little as $3.99 per month!

We still have tons of room to grow, and we are going to get there. My main goal is still to get over 2000 users per month (I was so close!), and to get more than 20 user per day via organic search (epic fail!). That means I’ll have to step up my SEO strategy! I’ll continue to tweak it and hopefully Partners in Fire will continue to grow.