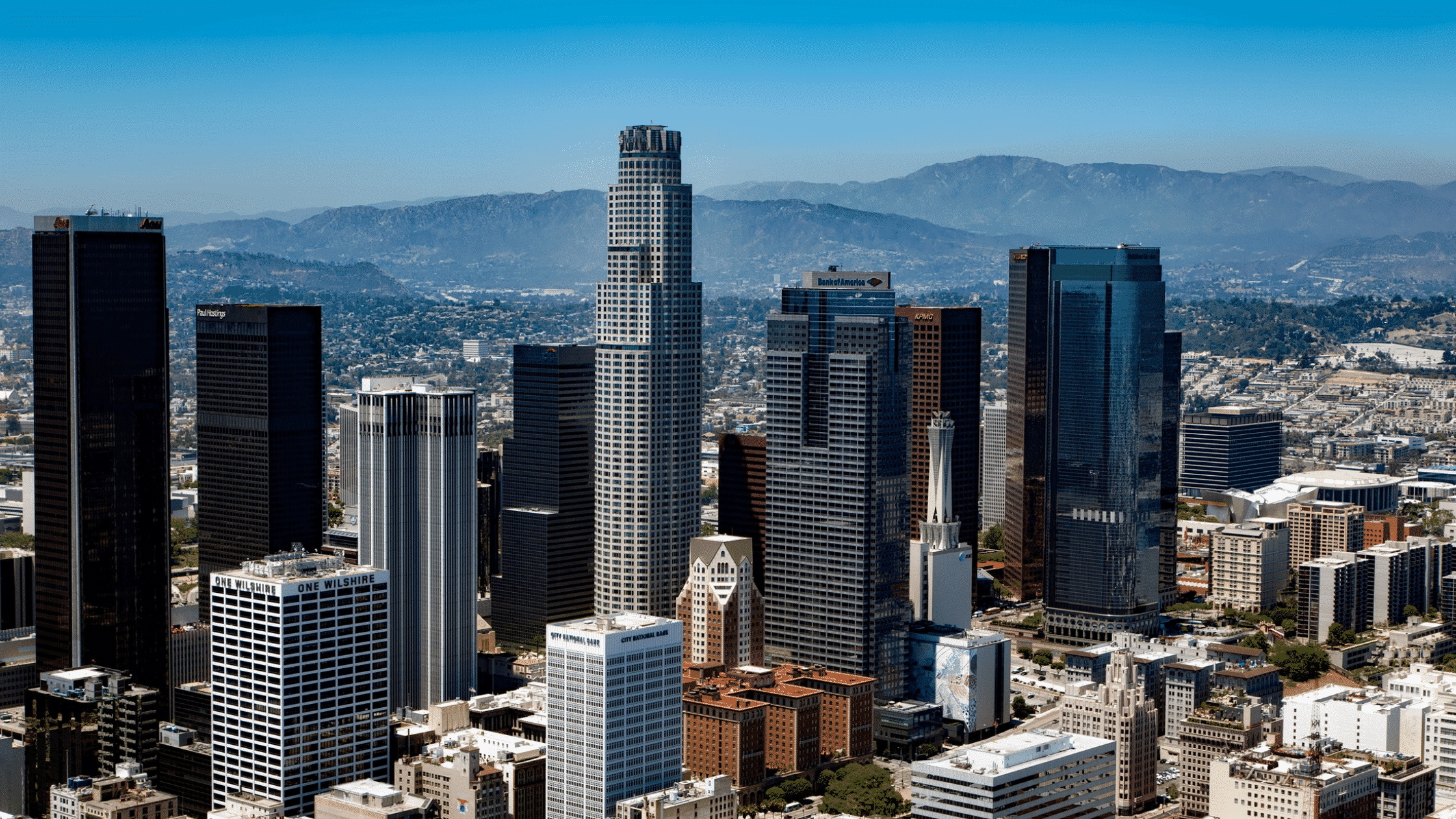 Los Angeles is a brilliant city with a wide array of activities for visitors. One of the best things about the city is its thriving art communities. Los Angeles art museums showcase contemporary works and pieces from grandmasters, so whatever preferred style, there’s an art museum in Los Angeles and the surrounding area that has it.

Here are the best art museums in LA to help guide you on your artistic journey through the city.

The city of LA is only one small part of the greater Los Angeles Region, including Orange County and the Inland Empire. These areas are a short drive away from Los Angeles proper and part of the general region.

The best museums in Los Angeles aren’t all in the city. Many of them are to the south in Orange County or smaller towns to the east. It’s all part of the greater Los Angeles area though, thus each one deserves a spot on this list.

LACMA is the most extensive and most impressive art museum in the Los Angeles area and on the pacific coast. It houses nearly 150,000 objects from over 6,000 years of human history. It is one of the best museums in California.

LACMA features an extensive collection of Pablo Picasso’s works, with over 80 pieces of the inspirational artist’s oeuvre. The campus is also home to the iconic Urban Lights display, a conceptual art exhibition located outside the main entrance.

LACMA is conveniently located near the Miracle Mile on La Brea Boulevard, just off the Interstate-10 freeway.

The Getty Center is located in the mountains just to the city’s north and features impressive paintings such as Van Gogh’s Irises and Gentileschi’s Lucretia.

The Getty Villa is located just north of Santa Monica, in an iconic coastal villa designed to look like a Roman country home. This museum features a wide variety of Greek and Roman antiquities.

If you love modern art, you have to check out The Broad, a contemporary art museum located in the heart of downtown Los Angeles. It features a wide array of works from the 1950s to the present.

The Broad celebrates Modern Art and the Pop Art movement. It has a massive collection of works by Andy Warhol, including Mao and Two Marilyns. In addition, it’s home to numerous sculptures by Jeff Koons, including Tulips and Michael Jackson and Bubbles.

The Museum of Contemporary Art is another two-for-one bonus (three-for-one if you count the installation in the Nevada desert, but that’s pretty far from Los Angeles!).

The two museum complexes, MOCA Grand Avenue and The Geffen Contemporary at MOCA, are about a mile apart. Both are near downtown Los Angeles.

The collection includes over 7,000 objects from 1940 to the present and contains a vast array of Ansel Adam’s photographs.

One of the missions of MOCA is to collect and exhibit contemporary art. This is one of the best places to see art from the 21st century by living and working artists who will be celebrated centuries from now.

Founded in 1990, the Hammer Museum seeks to celebrate how art challenges and inspires people.

Initially, it housed an extensive collection of drawings and paintings from European masters. But the founder, Armond Hammer, passed away shortly after its opening and could not fill it.

In 1992, the University of California at Los Angeles (UCLA) took over management of the complex. It’s now a robust gallery featuring the original collection in addition to a powerful collection of contemporary works. There is also its Franklin D. Murphy Sculpture Garden.

The Hammer Museum is located off the 405 freeway on Wilshire Boulevard in Los Angeles proper.

The Norton Simon Museum is an art gallery east of Los Angeles, in Pasadena. It’s home to one of the largest private collections ever amassed, featuring over 12,000 pieces.

The museum’s founder, Norton Simon (1907-1993), was an extraordinary businessman and avid art collector. He started collecting impressionist and post-impressionist paintings from Europe in the 1950s but expanded his collection to include art from India and Southern Asia.

The collection currently includes works dating from the bronze age through the 21st century and is a must-see for art lovers visiting Los Angeles.

The Long Beach Art Museum is on the coastal side of Ocean Avenue near downtown Long Beach.

When it opened in the 1950s, it mainly featured modern art from the local California scene. It’s a great place to see a variety of art created in Southern California during the middle of the twentieth century.

The museum has expanded since its inception and now also includes a collection of European modernist art and ceramics from around the world.

The Museum of Latin American Art (MOLAA) in Long Beach is the only art museum in the United States dedicated solely to modern and contemporary Latino and Latin American art.

MOLAA features a 15,000-square-foot sculpture garden and over 1,300 works of Latin American Art.

Although the museum initially only featured Latin American art specifically, the mission expanded to include Latino art in 2016.

JANM features a collection of drawings by Mine Okubo, oil paintings by Hisako Hibi, watercolors by George Hoshida, and a wide array of textiles and artifacts.

Many of these works were created by Japanese Americans while imprisoned in internment camps during World War II, making it an ideal place to see art and learn about our sordid history.

Orange County Museum of Art (OCMA) is worth a visit. The original complex was in Santa Ana, CA, but the new building is in Costa Mesa. Check their website to see current hours after closures for construction updates in early 2022.

The OCMA has over 4,500 works in its permanent collection. Their focus is on twentieth and twenty-first-century artists with some nexus to California. The aim is to celebrate the art created in the state.

The Bowers Museum, located in Santa Ana to the Southwest of Los Angeles, first opened in 1936 to celebrate Orange County’s history.

From 1987 to 1992, the museum closed for a transformation. When it reopened its doors in 1992, it was a museum that celebrated arts and culture worldwide.

It currently has a vast assembly of art originating from Native America, the Pacific Islands, and Africa. The collection spans centuries and includes decorative art in addition to paintings.

Laguna Beach is an artsy city, so it’s no wonder that the art museum scores a spot on the list of best art museums in Los Angeles.

The museum features over three thousand works dating from the 19th century. Much of the art is local, as the museum strives to be an epicenter of California art and Laguna Beach culture.

Craft Contemporary, located on Los Angeles’ Miracle Mile, is a different kind of art museum. While most art museums celebrate paintings or decorative arts like ceramics and glass, Craft Contemporary promotes crafting as an art form.

Craft Contemporary has numerous exhibitions showcasing textiles, fabrics, and domestic wares. One of its primary missions is to celebrate designers who are often not represented in traditional art museums.

Though not often grouped with art museums, the Museum of Illusions on Hollywood Blvd is a masterpiece of conceptual art. The museum is part of the World of Illusions complex featuring the Giant’s House, Upside House, and an area where patrons can smash plates.

The artistic portion is the Museum of Illusions. The entire complex is an interactive exhibit that invites you to be part of the art.

There’s no need to tiptoe through the collection as you do in most museums. The World of Illusions invites you to touch it, feel it, and be a part of it. It’s living art.

The Jack and Shanaz Langson Institute and Museum of California Art (Langson IMCA) recently opened after acquiring two collections of California art. A University of California Irvine establishment, this museum is now home to the old Irvine Museum Collection and the private Buck Collection.

The Langson IMCA features over 4,500 pieces from the 19th century to today. These pieces represent varying genres, including California impressionism.

Where Else Can I See Art in Los Angeles?

Although the art museums in Los Angeles are the best places to see famous paintings from world-renowned artists, the galleries and art walks are perfect places to see and purchase works from new and up-and-coming artists.

The Arts District in downtown Los Angeles is one of the best places to see contemporary art in the city.

This small neighborhood boasts a plethora of galleries and studio spaces. Although many of these galleries feature high-end works from professionals, some have showings to celebrate smaller, local artists.

The Los Angeles Center for Digital Art (LACDA) is a gallery that celebrates all digital art forms. The center has exhibitions showcasing digital sculpture, interactive multimedia, digital video art, and the technology that makes these new mediums possible.

LACDA supports artists of all levels, showcasing local emerging artists alongside internationally established artists. If you are a fan of digital media and emerging technologies, this gallery needs to be on your California bucket list.

The Spring Arts Tower is a collective of artists local to Los Angeles. The gallery is in the same building as the Last Bookstore, located on the store’s second floor.

Five local artists are collective members and visitors to the gallery (or bookshop) can browse these artists’ work while they shop, though the individual artists may keep different hours.

The Spring Tower Arts Collective also hosts exhibitions throughout the year featuring both collective artists and outside artists. The shows are curated by the cooperative and open to the public.

Timing is everything if you want to see art in Los Angeles. The city hosts an art walk on the second Thursday of each month from 7 pm-10 pm. Most galleries are open to the public during this event, and many plan special showings each month.

Venice Beach is one of the best beaches in California. The city promotes arts and culture, and as part of this promotion, it allows small, local artists to set up daily booths along the beach walk.

Independent artists from all over Los Angeles head to Venice Beach to score one of these free spots. You can find raw, outsider art out on the beach in addition to craft vendors selling their wares.

You don’t need to visit a museum or gallery to see art in Los Angeles. Murals abound both in LA proper and in the surrounding region.

Some of the more iconic pieces include “Angel Wings,” found in various locations throughout the city, and the “Love Wall” in Culver City.

Los Angles is a Great Place to See Art

Los Angeles is a great city to visit for art history and see living, breathing art as they make it.

The art museums in Los Angeles run the gambit from historical to contemporary, classical to conceptual. There’s something for every type of art lover in this eclectic city.

When you plan your trip to LA, be sure to check out the iconic art scene in the city, whether by visiting one of these Los Angeles art museums or checking out the galleries and art walks. You won’t be disappointed.