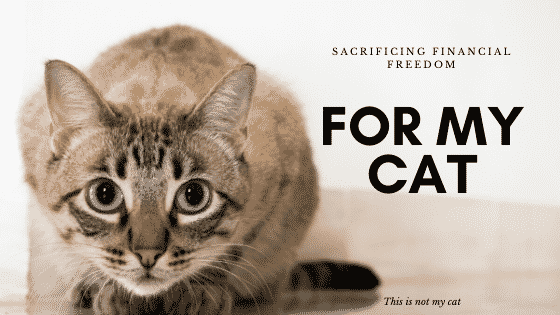 I’ve come to a turning point in my quest for financial independence. A crossroads, if you will. A time when I’m forced to make a decision. You see, I’m at coast fire.  I could literally quit my job tomorrow if I want and have a secure traditional retirement. But to do that, and survive financially until then, I’d have to sell the house and adapt the RV lifestyle – which sounds freaking epic until I remember that I have four cats and two dogs. Stuffing them all in a RV and traveling doesn’t really sound like the answer. The other option is sacrificing financial freedom.

Sacrificing Financial Freedom for my Cat

I know it sounds ridiculous – but hear me out. This isn’t the first time I’ve written about how pets can hold you back, or struggling with feelings of regret for getting so many. But I have come to a peace about it.

My entire quest for financial independence is because of passion fire – I want to quit the mundane job that I hate and explore my passions for the rest of my life. Living the RV life would totally line up with that. So would traveling the world, teaching in Cambodia, and riding my bike across America on route 66. But the thing I kept missing was that there is something else that I’m incredibly passionate about.

I’m Passionate about my Cat

Tons of people are passionate about their animals, so this shouldn’t have been that much of a surprise. But sometimes, it’s so much harder to look at the things you have already, and say “yes, I’m perfectly happy sacrificing my financial freedom for this – at least for now”.

And it doesn’t have to be a cat. It could be your children, a project that you love, a certain lifestyle of hobby that’s only affordable because of your job, or any number of things. Financial Independence doesn’t have to be a path set in stone -that’s why so many different variations have popped up. It can be whatever you make of it. The point of the movement isn’t to never work again -it’s to have enough financial security to not have to worry about things, and to be able to build the life of your dreams.

It just so happens that my dream life includes making sure that my cats and dogs are happy and taken care of until the end of their natural lives. I love them too much to even imagine giving them up – and that’s okay! I’m okay with sacrificing financial freedom to make sure they have a safe and secure home.

There Are Some Advantages

I’ve come to realize that this isn’t a bad thing for so many reasons. First and most obviously, the six lovely fur babies that I get to hang out with and take care of every day. I love those little cuddle monsters.

But that’s not the only advantage. Let me be horrifyingly transparent for a second with a dirty little secret of mine: I don’t actually have enough saved in non-retirement accounts to live longer than a year or so without a job. The plan is to sell the house I’m currently living in – so that would give me another 2-3 years depending on the market when I’m ready to sell.

In my original plan, none of that really mattered. I wasn’t going to quit my high paying job to never work again, I’m was going to quit to pursue my passions! Some of them will pay me enough to live frugally – and I was totally fine with that (I’ve always had a slightly skewed idea of financial independence anyway!)

But, I can’t ignore the very real consequences of sacrificing financial freedom for even a few extra years. I’m going to have an even more secure traditional retirement, and I’ll be able to build up an even larger cushion in my non-retirement accounts. I’ll also have more time to get this old house fixed up and in better condition to sell! So even though I’m sacrificing my financial freedom in the short term, I’m really improving my long-term outcomes.

My original plan was to quit my job in January of 2021 and start pursuing my passions. Though I am at Coast Fire, I don’t actually have plan for surviving between now and traditional retirement age. I was going to throw caution to the wind and head out for a life of adventure and excitement!

I was willing to sacrifice a ton of comfort and security for freedom. That meant work camping, roughing it, renting smaller places, living in an RV, and doing anything I need to do to maintain that freedom of mobility.

My new plan is going to give me a little more time to get on the right track. The new target is quitting when I’m 40, which will be in December of 2022 (but I probably won’t quit until after the new year -that just makes more sense!).  I’m giving myself two more years to build up my non-retirement accounts and get on the road to freedom.

I know what you’re thinking – that’s only 2.5 years from now, and 2 years from your original projection. How are things going to change with your pets in such a short time frame?

I don’t think it will change much that quickly. I’m only worried about one of my babies not making it that long (he’s an older Akita, and sadly, they don’t have the longest lifespans. I hope he has at least two more years of life in him, but I’m not sure). My oldest cat is 13, and although they are all technically seniors, indoor cats live for about 20 years on average, so I hope to have them all for at least another 7 years. If four cats in an RV isn’t the answer, how am I going to quit in 3 years?

I have many passions. My original plan was to pursue the ones that include adventure and excitement first – those sound more appealing to me. But, I also have goals and dreams that require a bit more stability. I want to write a book, spend some time focusing on art, be a wildlife biologist, and study anthropology. Those are things I can do while providing my darlings a safe and loving home. But they are also things that require a bit more of a nest egg – which is why I’m pushing my date back by a few years.

Not Following the Script

The thing is -there is no script for achieving financial independence. The movement is about opting out of a system that doesn’t work for you, and building a life that does. For me, that life includes taking care of my little guys. Your life will probably look much different, and that’s perfectly okay. I don’t think there’s a one size fits all approach to this.

What are you Sacrificing Financial Freedom for?

Have you ever come to similar crossroads, where you realized that you want something more than you thought? Or realized that one thing was so much more important to you than another? What was it? I want to hear your stories!

9 thoughts on “Sacrificing Financial Freedom – For My Cat!”