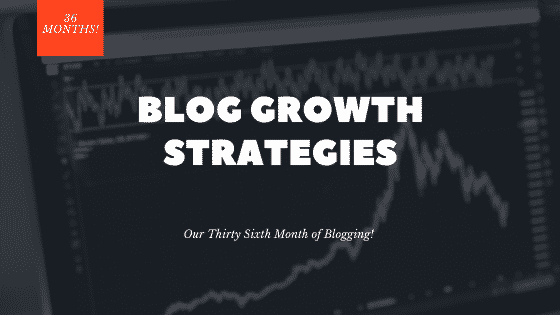 Our 36th month blogging marked our third month in a row with over ten thousand-page views. We made a few changes this month and continued with a lot of the processes we’ve been working on previously, so I’m excited for the consistency, but looking forward to continued growth.

We had a handful of days this month with under 200 users, and all were at the beginning of the month. I was worried during the first week – it looked like our winning streak was coming to a halt and that our viewership was on the decline. But, that couldn’t have been further from the truth, it ended up being just a few rough days before an epic win and a great rest of the month.

The majority of our traffic is still coming via organic search. I’m not going to lie, I’m kind of getting impatient for the organic growth explosion. I’m thankful to be getting consistent numbers for the past three months, but I’m ready to see some increases from all my hard work on SEO recently!

The top page is still “How to be a Twitch Affiliate”, and “How to get Twitter Followers” is still number two, but “Reaching Coast Fire” made a surprise surge to third place this month. “How Do Twitch Affiliates Make Money” and “Buffy is the Greatest Show” rounded out the top five this period. All of the top five posts had over 200 users in our 36th month, which is pretty spectacular.

One really exciting thing that happened this month is our post “FU Money” made its first appearance in the top 10. This is one of the first posts we wrote with all of our fancy new SEO tools, and it’s exciting to see it start to rank. Does this mean the other posts we wrote with SEO in mind will be following in its footsteps? Only time will tell, but I really hope the answer is yes.

The biggest surprise (and win!) for us this month was an awesome feature on MSN. This feature scored us over 1000 pageviews in referral traffic, and really helped us reach our 10K pageview goal for the month.

MSN picked up the post “19 Ways to Improve Your Life Right Now”, and that led to a ton of pageviews for posts linking to it, like “Self-Care Sunday” and “Adult Online Education”. It was my first time being featured in such a mainstream publication, and an incredibly exciting experience.

We had nearly 1500 users coming to us via direct hit during our 36th month, which wasn’t as much as last time, but is still pretty awesome. A lot of these direct hits are from our wonderful subscribers – if you haven’t hit that subscribe button yet, what are you waiting for? Where else will you get blog strategies, travel tips, money advice, gaming info, and art ideas straight to your inbox?

Our reach on social media declined slightly this period, but it wasn’t drastic, and I expect small variations from month to month. We had about a hundred fewer viewers from all social media channels combined compared to last month, for a little under 600 total users.

We had a little over 250 users finding us from Pinterest this month, which is where our biggest decline can be found. Our stats from Pinterest were all over the place this month – on some days we had over 20 users, but on others, we had only two. I wonder if we get more engagement from the platform on the days that we actively pin, and see fall offs on the days we don’t. I’ll have to record the days that I pin in the future to see if this might be the case.

Unfortunately, I still haven’t had time to finish the wonderful Pinterest Ninja course, which helped increase our users from the platform by over 100 visitors each month since I’ve implemented the few strategies I have learned. I’m certain I will be able to find time for that this month and expect to see a surge in my traffic when I implement all the strategies.

We had 90 users from Twitter this month, which is a little more than last month but still not a lot. I’m starting to learn though that Twitter really isn’t the best tool for driving traffic. It’s great for networking, building an audience, and engaging with like-minded folks, but it’s not the best for traffic.

Still, I love Twitter, and I try to be active on it. I made some of my best virtual friends there, and if it weren’t for the platform, I never would have learned about the SEO Hustle group I’m in, which showed me how to actually attract users from Google.

Our reach on Facebook was about the same as it was last month, and all of it is due to the Revive Old Posts plug-in. We had nearly 70 users visiting us from the platform, the majority of which came when old posts were randomly published. I think it’s really cool though, that some of my old stuff is getting a bit of fresh engagement. The only problem with it is that some of my old stuff is…not good. But that’s okay, we learn and grow with every post, and it’s quite interesting to see it when reading through an older one.

Our content has been amazing this month, like always. We had a large variety of content, which I think is important and draws a larger audience. A lot of folks say that in order to be successful as a blogger, you have to pick a niche and stick to it. I tried that for a long time – writing only about money topics, and trying to relate anything else I wanted to write about to money. It was fun, but I felt stuck.

It’s hard to rank for money topics, due to the Your Money or Your Life algorithm that Google has. Also, there are so many other topics relating to life and financial independence, money is just the tip of the iceberg! That’s why we decided to change things up this month.

Don’t get me wrong -we’re still going to be pumping out the engaging money content that you’ve grown to know and love. But we are also shifting to focus on a passion fire perspective. This really isn’t much of a change, we’ve already incorporated gaming and travel into the blog- but this month we’ve added art and we changed our organization structure to better align with what we write about.

We published a great assortment of interesting content this period. Some posts were written for SEO, some for monetization, some for Pinterest, some were just for fun. Many were a combination of those things! You have to mix it up a bit, right?

We started with a helpful post on alternatives to cable, then gave some great wellness information on setting intentions and living in survival mode.  Next, we went back to our financial roots with 22 small ways to save, and wrote a fun post about Buffy the Vampire Slayer (which really does relate to life and finance, I promise!). We tip-toed into the world of art blogging with a post relating painting to a side hustle, and we plan to post more art related content on a regular basis. Of course, we had to talk about thankfulness on a holiday dedicated to it, and we rounded out the month with two epic gift guides, one for gamers and one for artists. All in all, it was a fun and interesting mix of content!

We’ve been stagnant at about 10K pageviews for the past few months, and our biggest goal is to move beyond that. The great thing is that we have a method in place for doing just that!

The best way to get more pageviews is to write for SEO. This has been our biggest focus over the past few months, and it’s finally starting to show (with our post on FU money slowly creeping up the ranks). The biggest problem with this method is that it takes time. Posts take anywhere from six to eighteen months to start showing up at that top of Google, so it can be disheartening to do all this hard work and not see results for such a long time. The key, in my opinion, is to be patient. I wrote FU Money back in August, and it’s just now moving. That’s the first month I seriously started writing for SEO, and it’s just now making a dent. I’m hopeful that I will see a lot more movement in the coming months when the posts I wrote after that start to rank.

I think that branching into art and other passion fire topics is going to help our readership as well. There are so many interesting topics in this world, and limiting ourselves, in my opinion, was hurting us.  Gaming and art are two that we can actually write about, and we are seeing success in the gaming arena already (its far too early to tell with the art posts). We’re hoping this new organization and branching out will also improve our readership in the long run.

We made a tiny bit more money this month than last month, which is good because we are seeing consistent growth in this arena. It’s still not enough to quit – but hey, if we grow exponentially it will be soon!

Our ad revenue grew by about twenty bucks during our 36th month, which is pretty nice. One big change I made is that I realized there were no ads in one of my top performing posts. I dropped an ad in, and that helped lead to an increase in revenue. The other big help is the increased RPMS – but that’s standard for this time of year when more people are shopping. I don’t want to count on that moving forward.

We did a lot better on affiliate sales this month, and it accounted for a huge portion of our monthly revenue. We sold some books on Bookshop, made a handful of Amazon sales, and got a commission for getting more folks to join the best blogging group there is: the SEO hustle.

One cool thing about these affiliate sales is that some of them were from posts we wrote specifically for it. Making sales on items that we believe in and are actively promoting is a wonderful feeling.

We made $87 this month! This is a huge growth over last month, even with the slight increase in price for the insiders! I decided this month to upgrade to the full SEO Hustle option of the Insiders group, for full access to MOZ and other SEO tools. Getting this stuff with the group means I get it at an awesome discount (MOZ alone is a hundred bucks a month!) and I also get to be in the mastermind group that helps everyone with their SEO goals. It’s definitely well worth the price. I would still be sitting at $0 in revenue and no page views if it weren’t for the guidance and direction of the group.

Partners in Fire is continuing to grow and evolve. All the work we are putting in now is going to pay off dividends in the not-to-distant future. I’m excited to see where it takes us!