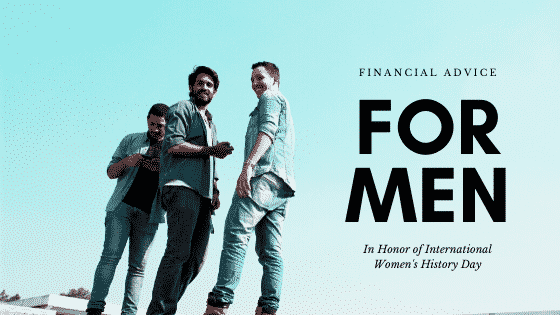 There are so many news articles, posts, etc., that pass themselves as journalism professing to have excellent financial advice for women. Still, in reality, most of them are shallow and condescending. They tell women to stop spending money on clothes and make-up and ditch the morning coffee. It’s the latte, not the gender pay gap, that keeps you from achieving your dreams. And we all know that women are the ones blowing all their money on lattes – men wouldn’t waste money on froofy drinks.

Just check out this post about home beauty regimes and saving money by avoiding name brands, or this gem, which tells women to name their savings accounts to help them save money, for some solid ideas of what I mean.

So, I thought it would be fun to flip the script in honor of Women’s History Month. What if men were given the same sexist money advice that women get? What types of things would be on that list, and how does reading it make people feel? So, I present you with Financial Advice for Men, as written like financial advice for women is written (and maybe with a bit more snark).

Skip the Beers and Energy Drinks

A six-pack of even the cheapest beer costs five or six dollars, and an energy drink costs anywhere from three to five dollars. If you’re buying one of these every day, that’s $35 a week down the drain and nearly $1600 per year. Instead of blowing that on tasty drinks for yourself, you should be saving it. Make coffee at home for that energy boost in the morning, and limit your six-packs to once a week. It’s better for your wallet and your health.

Come on, guys. We know you aren’t saving as much as you should be because you had to have the latest Dungeon Master video game. That sixty bucks could have gone into your investment or savings account instead of being wasted on something fun for you. You should look at your entertainment center and see how much money you have in video games. If you have more than one or two games, consider selling them on eBay. Playing games is a waste of time anyway. You should focus on more important things.

Do You Really Need a Sports Car?

I get it; you want the latest model of the latest sports car so you can show it off. How would everyone know your status if you didn’t drive a fast car? But sports cars (and new cars in general) are a giant waste of money. Instead, buy a used, reliable car such as a Toyota or Hyundai. These cars may not be as glamorous, but they are built to last and will save you tons of money in the long run.

Why do you need to make yourself look presentable? It’s not like society tells you that the clean-shaven look is more desirable and professional. And with razors and other beard trimming products being so expensive, it’s much cheaper to go without shaving. No one will even notice. It’s not like anyone can tell whether someone has shaved their face or not.

Don’t Be Too Confident in Your Investing Skills

Men are renowned for their confidence. But, frequently, they mistake confidence with hubris. This can lead to riskier investment choices and losses in the long term. Do a little research instead of acting like you know all the answers. Talk to a financial advisor and make sure your investments are solid and stable. You don’t need to have all the answers, but you do need to know when to ask for help.

How This Advice Relates to Women

I’m sure that most women reading this will see how much it mirrors the advice we are given every day. Typical financial advice that we hear is to skip the latte. It’s so ubiquitous that it spawned a book, “the latte factor,” in which a generous older man guides a naïve young woman and helps her make better financial decisions (full disclosure: I never actually read it – the reviews were enough for me to nope out).

The message from most financial advice for women is clear. Don’t buy lattes. Stop buying new clothes. Why are you wasting money on make-up? You don’t need name-brand items.

Why doesn’t financial advice for men carry the same message? Don’t buy beer. Stop buying video games. Why are you wasting money on grooming products? You don’t need a sports car. The truth is that stereotypical men waste just as much money as stereotypical women do, but no one bats an eye when men do it.

General financial advice and advice geared towards men are usually more well-rounded. Sure, there will be tips about saving money, and usually, that advice is solid. But men also get advice on investing, planning for retirement, and making the best use of tax laws. With women living longer and becoming breadwinners more and more, having that kind of advice is crucial.

The one silver lining to this post is that it’s getting better. Much, much better. It’s harder to find these silly, stereotypical articles telling women to stop spending money, and we can also find tons of solid financial advice written for women by women. Just look to Tread Lightly, Retire Early’s epic post listing the Women of the Financial Independence Movement for a massive list of women writing about money. It may have started with women talking about financial independence, but it’s since been broadened to include a ton of women talking about a variety of money topics. That post spawned a movement of women coming together and talking about finance in authentic ways that are important to us. And I think it’s just the start.

When I first published this piece in 2019, the first page of Google was filled with the condescending articles that I referenced, and more. Now, the first page has mostly solid financial advice that is realistic for women. There was also an epic list of financial advice for women on money-wise that had zero mentions of investment or retirement planning but had five different statements about spending less and budgeting. That post is now gone and the link goes directly to their page on managing money. This is a great thing to see. I hope that posts like this drew attention to the disparity and worked to effect change in how financial services relate to women.

More and more women are taking control of their own finances, getting involved in investments and retirement planning, and becoming the family breadwinners. And the media is slowly but surely following suit. Hopefully, someday soon, posts like this won’t be needed to draw attention to the differences. We’re closer to it now than when this was first published, but we aren’t quite there yet.

I know that I have a pretty equal ratio of male and female visitors, and I’d love to know how this post made everyone feel. Ladies, did you recognize the correlations in the advice right away? Gentleman, were you offended that I assumed you spent money on beers and video games? Or did you think it was ridiculous that I’d claim shaving doesn’t matter? What were your reactions? I’d love to know in the comments!