Do you work a nine-to-five workday? Ok, so it may not be exactly nine to five. Maybe it’s eight to four, or seven to three – you get the picture. The point is, you probably work about 40 hours per week. And that doesn’t include commute time or mandatory meal times. And guess what? It’s a scam.

The nine to five scam is a cultural phenomenon that keeps people stuck. It forces people to buy into the idea that they need to sell nearly a third of their time to a company – and for what? To survive really. There aren’t many better options out there, are there?

When we talk about nine to fives, we are generally referring to the typical eight-hour-a-day, five-day-a-week workday. This adds up to a forty-hour-per-week work week. It’s called a nine to five because back in the day, those were banking hours. Banks were open between 9 AM and 5 PM Monday through Friday.

A lot of other businesses followed that same model. Now, most office jobs are considered nine to five jobs, even if they start at varying times. In my opinion, the thing that makes a job nine to five is that it’s a set schedule, eight hours per day that starts in the morning and ends in the afternoon, and M-F. It kinda seems like a sweet gig, doesn’t it?

What is the Nine to Five Scam?

And that’s what makes it so sinister. The scam is that you’ve been sold that a nine to five job is a good thing – something to aspire for. Don’t get me wrong, it probably is better than some of the other options that our society has for work schedules. But that’s what makes the scam so insidious. All of the other options are so awful that we feel lucky to score a nine to five in today’s environment!

Let’s take a look at some of those other options:

Work Schedules that Make the 9 to 5 Look Good

Shift work is the typical schedule for factories and other “blue-collar” type jobs. Factories run for 24 hours a day, and those hours are divided into three shifts. The morning is 1st shift, the afternoon is 2nd shift, and the evening is 3rd shift. 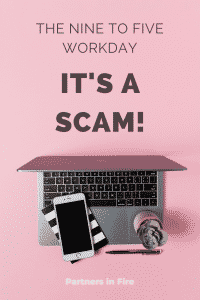 Many companies rotate their people through these shifts, so you will spend a few months working one, and then you will have to adjust to another. That sounds miserable, doesn’t it? I’m sure there are some companies that allow their employees to bid for certain shifts – but don’t expect to get the day shift if you are new.

A ton of companies have shifted away from 8-hour workdays so that they can list their employees as part-time. Some of this had to do with the Affordable Care Act requirement that full-time employees receive benefits, and some of it is just because there isn’t enough work for full-time employees.

Working part-time is great if that’s what you want and you can afford it. Hell, I’d love to work part-time! But the unfortunate reality is that most part-time workers can’t afford it, and they would actually prefer to be full-time. Some of them even have to work two part-time jobs in order to make ends meet – which can be extremely difficult given that most part-time schedules aren’t set.

Most people strive for the stability of a nine to five office job because their positions don’t offer any semblance of stability. One week you might be working four evenings in a row, while the next you are working all mornings. Generally, your schedule is split between morning, afternoon, and evening shifts.

This varying schedule makes it incredibly difficult to plan any sort of life. If you don’t know what your work schedule is going to be from one week to the next, how can you plan things?

I love the idea of the gig economy. It allows workers to choose their own work and their own hours. But that’s only in my idealistic world. In reality, gig workers get screwed over constantly. If it’s their only job, they have to work atrocious hours just to make ends meet, and they don’t receive any protections that other workers have access to.

So Why is the Nine to Five so Bad?

Clearly, the nine-to-five schedule is one of the best options we have available. But that doesn’t mean it’s good, or something to celebrate. I get wanting to break away from those horrible schedules to get something a little less awful, but at the same time, we can try changing our culture around work and attempt different options. We don’t have to be tied to the least bad choice.

Flexible schedules are very similar to the varying schedules that I bad-mouthed above. You may not work the exact same shift every day. But the difference is that when we talk about flexibility in scheduling, we are generally referring to the employee’s perspective. Instead of being assigned random shifts, you are deciding when to come to work. This can help employees schedule doctor’s appointments, child care needs, and a variety of other important life things.

With most office work, does it really matter if an employee is there from nine to five, or eight to four, or even ten to six? Probably not, right? As long as the work gets done, it shouldn’t matter if employees are given more flexibility in when they work.

Another great option, and one that we are seeing a ton of success with in the response to Covid-19, is remote work. We are learning that all workers don’t actually have to be in the office at all times to achieve maximum productivity. In fact, many employees are even more productive when they are working remotely.

Why Do We Have Nine to Fives and 40 Hour Work Weeks?

When we talk about nine to fives and 40-hour workweeks, it’s important to acknowledge how they came about in the first place. The forty-hour workweek was a hard-fought battle. It greatly improved the lives and working conditions of millions of people, who, during the industrial revolution, were basically forced to work until they dropped. Workers rose up to fight these injustices, formed unions, and won the right to free time. Thus, the forty-hour workweek was born. Eight hours of work, eight hours of rest, and eight hours to what we will, as the slogan goes.

But, in today’s world, it’s more of a trap than anything. Eight hours of work easily morphs into 10 or 12 hours when you include commute times and required but unpaid breaks. Or the fun new way that employers have found to take advantage of their employees: salary work. Workers are paid a “salary” to be available when needed, which usually means more than the traditional 40 hours. It isn’t necessary to be tied to a job for all waking hours, and the sooner we realize that and say we’ve had enough, the better.

I think the most important thing we can do to change our attitudes about working is to abolish the 40-hour workweek. With the advent of technology and the imminent threat of automation, a 40-hour workweek just isn’t going to be necessary anymore. We won’t need to toil for extended periods to meet our needs. Culture is slow to adapt, but it needs to. Here’s why the 40-hour workweek and nine-to-five schedule are outdated.

Technology is advancing at such a rapid pace that we can get the same work done in far less time. If an employee can get all of their work done in four hours, why do they need to stay on the clock for eight hours?

The answer is that the folks on top want to maximize profits, and thus expect workers to double and triple productivity with technology, rather than allow for extra free time. It might take a huge cultural shift to change this attitude, but it needs to be done for the betterment of everyone.

As we discussed with commute times and unpaid lunch breaks, the nine-to-five doesn’t leave a lot of room for work-life balance. The theory that a person would have eight hours a day for leisure activity breaks down when you remember that a workday is actually closer to 10 hours.

This system also doesn’t leave a lot of room for chores and errands. It was developed during a time when someone, whether it be a mother, grandparent, or older child, was tending to the home. In our current system, most families can’t afford to have someone stay home, so all of this work needs to be done after work hours, which leaves very little time for leisure.

I’m not advocating to go back to gender-based discrimination at work so that women can take care of the home. Rather, we should move forward and find a system that works for everyone while allowing everyone the freedom to choose their own paths in life.

A final reason to abolish the nine-to-five is the productivity gap. Simply put, people aren’t productive for eight hours straight. Research suggests that five-hour workdays would be far better for productivity.

If people work less, they will get more done at work and be happier at home, which is better for society overall.

The nine to five work week is so ingrained in our work culture that it even spawned a movie. This Dolly Parton film came out 40 freaking years ago – that’s how long this idea has been entrenched in our society. I think it was a good thing back then – definitely something to strive for in work. But, times have changed, and our ideas around work should change with them.

8 thoughts on “The Nine to Five Scam”