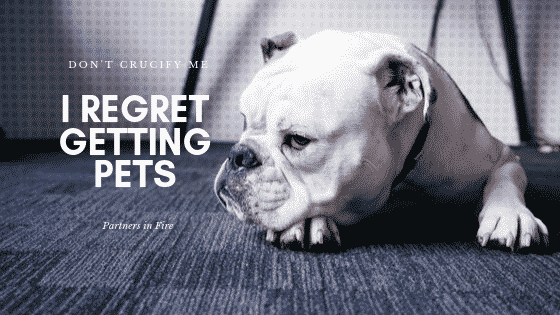 I Love My Pets

Ok, before the brigade of pet lovers starts crucifying me– hear me out. I have four cats and two dogs, and I love the little buggers. I would never dump them at an animal shelter or give them less than the care that they deserve. Since I adopted them, they are a part of the family. They are my responsibility, and I will do my best to make sure each and every one of them has the longest, most comfortable life possible. I mean seriously, I spent over four thousand dollars this year on vet bills for one of my cats!

So now that I got that disclaimer out of the way, let me talk about why I regret getting pets. Maybe it will help someone just starting out in life decide to wait on pet ownership, and maybe it will help others realize that adopting a dog or cat is in fact the right choice for them. Either way – you should definitely read this before getting that new puppy or kitten!

Why Do I Regret Getting Pets?

As much as I love them, I can’t help but think about how much different my life would be if I didn’t have them. I could have taken that job in California, or found a place to rent in Savannah and Pennsylvania rather than buying a home. I could quit my job on a whim and travel the world, or even do something as simple as take a spontaneous vacation. Unfortunately, none of these things are feasible with the pets that I have.

I Regret Getting a Dog

I think the dogs are a bigger regret than the cats. Cats are easy – I was able to take weekend trips whenever I wanted when I just had them. But that’s just not possible with the dogs. You absolutely can’t leave them alone and go on an overnight trip, much less an entire weekend get-away. I mean sure, you could be a terrible pet owner and leave the dog chained up outside for its entire life and not worry about such things, but that’s just not my style. I consider all my pets to be members of the family, and I would never subject them to that type of treatment.

Instead, I have to hire a pet-sitter if I want to get away. I generally use Rover to find someone who loves dogs and will take care of my babies the way I would. I pay a ton of money to have someone take care of my little guys, so if you love animals, it might be a great side hustle for you. 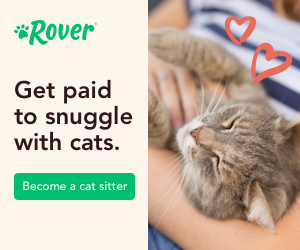 But I digress. Outside of the inability to travel (which cats limit as well), there are three main reasons that I regret owning a dog more than my cats, and those are the expense, the lack of mobility, and all the time and energy that dog ownership requires.

Dogs are also crazy expensive. I mean, sure, they aren’t nearly as expensive as a horse, but still, it adds up. Their food costs thirty bucks every two weeks, and I’m constantly paying vet bills. One had an ear infection, then another had a weird skin rash. You have to take them to the veterinarian at the first sign of a problem to make sure it’s not serious, and to give them the care that they need.  I have them on a wellness plan, so I’m paying a hundred bucks a month just for that.

All the other things that dogs need cost money as well. I pay for their flea and tick prevention, which is a monthly pill that helps prevents the parasites. I also want to make sure they have enough chew toys and bones available so that they don’t destroy my stuff (Coyote ate my couch when he was a puppy – on the first day I had it!). It’s important to keep energetic breeds active, or they will do stuff like that.

But the biggest issues with having the dogs is the limitations on housing. Do you have any idea how many landlords refuse to rent to someone with a dog over fifty pounds? If you guessed most of them, you’d be right. I regret getting my dogs because having them has seriously limited my mobility. I can’t look for better opportunities elsewhere because moving is prohibitively expensive. I’d have to sell a house and then buy a new house. Both of those things cost tons of money unless you can get lucky and sell in a massive real estate upswing.

A few months ago, I got the most amazing job offer of my life. It was for nearly 120K per year, and it was back in Long Beach, CA. As you all know, I turned the job down. My official reason is that moving back California won’t help me on the path to financial freedom, and while that’s technically true, it’s only true because I have so many pets.

The real reason I turned the job down is because of all of my pets. Moving back to California with them would be incredibly expensive. Finding a home where we could all live in the area would cost me more than the raise every year – in fact I doubt I’d be able to afford it at all.

The thing is, if I didn’t have them, I would have taken the job. I could have easily found a one-bedroom apartment or roommate situation for around 1000 a month in the area (ok-maybe not easily, but those options do exist). After my housing costs, I’d still be taking home over 100K a year. That would be totally worth it for a few years, and it would actually help me on my journey to financial independence.

The last reason why I regret my dogs more than my cats is that they take up so much time and energy. And honestly, I don’t have enough of it for them. I’d love to take them to the dog park (if we had one nearby) or hire a dog walker (if I had the extra income) but I can’t do those things.

Although they are incredibly well behaved, Coyote is also a high-energy breed and thus very playful. He wants to go with us everywhere, he wants to play all the time, and when he was a puppy, he destroyed stuff if he didn’t have a positive outlet for his energy.

I feel awful that I can’t provide him with all the time and attention that he needs, but I do my best. He’s a rescue dog, I actually found him abandoned in the California desert- and I think that having a loving home where he’s cared for even if he doesn’t get all of the attention he would like was a much better option than sending him to a shelter. Coyote is a really good dog who gets along well with all the cats and everyone else with who he comes in contact.

And there’s also all the poop. I’d much rather clean a little box every day then have to carry little baggies of dog poop with me on walks or clean up dog poop from my yard every day. That part about dog ownership really sucks.

I Regret Getting a Cat

Truthfully, I don’t regret my cats as much as I regret my dogs. They are much easier to take care of. When I was just a crazy cat lady, I could take weekend trips and not have to worry about whether they’d destroy the house when I was gone. Sure, they’d get mad and throw a few things off the counter. But overall, they can take care of themselves for a few days.

However, I do regret getting four cats. Even I acknowledge that’s a bit much. If I just had two cats like a normal person, I’d be able to do most of the things that I want to do. I could have found a cheap one-bedroom rental in California that accepts cats. I could move them cross-country without having to stop every two hours (ok, to be fair, most of that is for me).

But still, even with just one cat, my dreams of traveling the world would have to be put on hold. Cats don’t travel well, and there are tons of rules and restrictions to bringing domestic animals across international borders. And with four cats, it’s basically a pipe dream.

What Should You Do if You Regret Getting Pets?

My first instinct is to tell you to suck it up and take care of the pet. It’s part of your family. But I know that’s not realistic or appropriate for everyone. If you have pet and can no longer offer it the care that it deserves, it’s perfectly acceptable to re-home it.

However, you should do your research before re-homing a pet. Make sure you are giving your pet away to good owners, where it will be happy, healthy, and well taken care of. Here are some great tips for re-homing if that’s what you need to do.

Please avoid dropping your pet off at a shelter. Most of them are so overrun with homeless animals that most only get a few days to get adopted -and get euthanized if they don’t.  If you can’t find a good new home, at least find a no kill shelter.

What Am I Going to Do?

I didn’t write this because I’m going to give them up or change anything that I’m doing. It’s more of a cathartic post. I’m writing it to acknowledge my feelings. Hopefully this will show others who may be in the same situation know that they aren’t alone. People don’t talk about these types of regrets and the ways that having pets can hold them back, but I think it’s important to have these conversations. It can prevent people from getting pets who probably shouldn’t have them. In addition,  it can give others a realistic idea of what to expect if they choose to adopt.

So, if you regret getting pets, it’s not the end of the world. It doesn’t make you a bad person.  In fact, it’s best to acknowledge the feelings you are having so you can decide what the best way to move forward is, for both you and them.

16 thoughts on “I Regret Getting Pets”