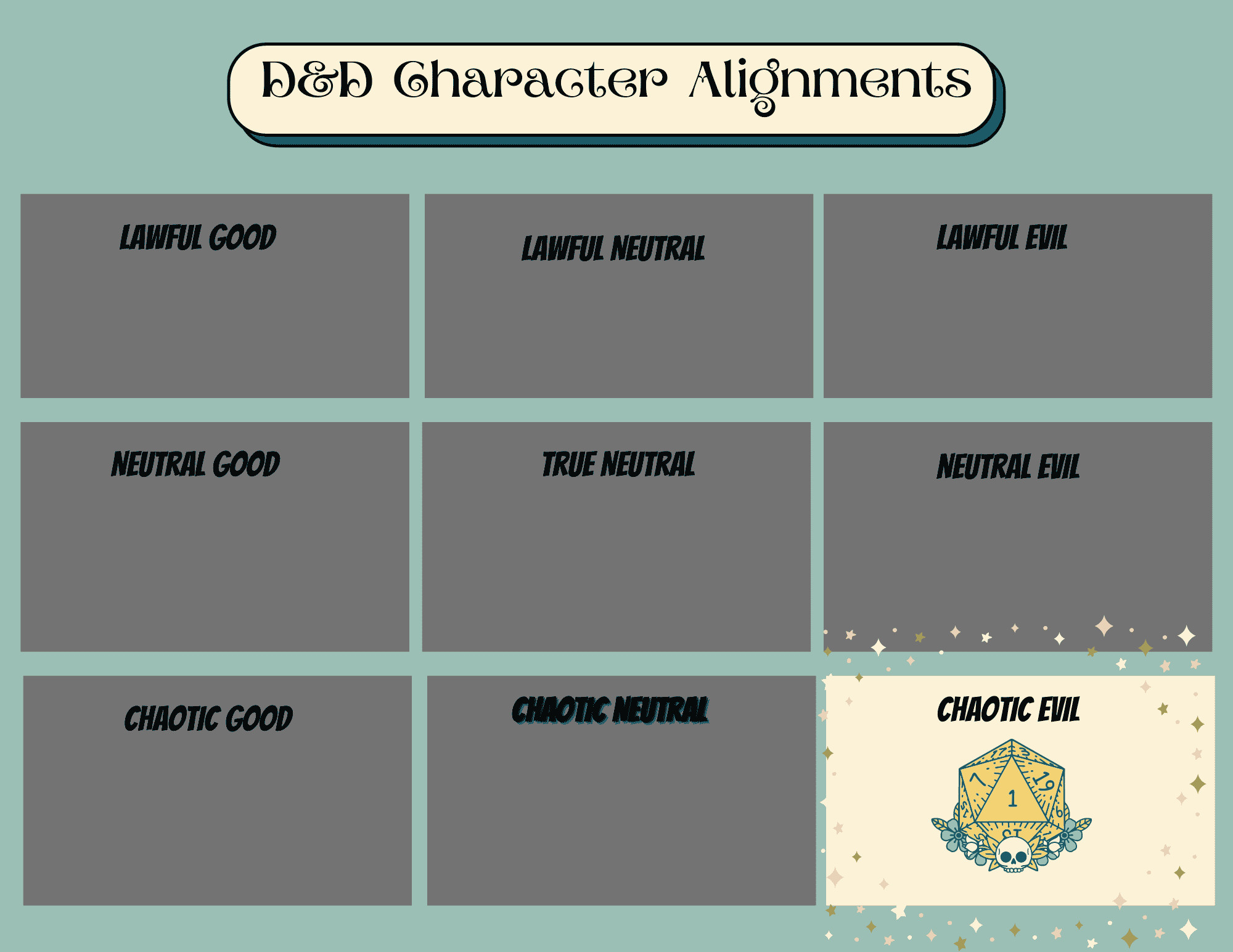 Dungeons and Dragons character alignments provide ground rules for character development in the popular tabletop game. With “nerd” culture on the rise, these guidelines became applicable tropes, allowing fans to describe characters in all kinds of fiction, from comics to movies to video games.

Chaotic evil villains abound in fiction, often as compelling foes for our favorite heroes. They are fan favorites, usually revered as characters you “love to hate.”

What Does it Mean to Be Chaotic Evil?

Chaotic evil characters embrace their name. They are messy and downright cruel. They don’t care about rules and often want to destroy the system. However, unlike chaotic goods or neutrals, they don’t do it for the sake of humanity’s freedom or to fight oppression.

Chaotic evils hate the system because it provides comfort and security. They want to dismantle it to cause pain and strife. They enjoy the suffering of others and thrive wherever chaos reigns supreme.

Most chaotic evils have a simple goal: bring down the system and allow evil to run amok. They want to destroy things, hurt people, and cause panic without pesky rules and laws getting in the way.

Others in this alignment ignore the system. They don’t actively try to tear it down, but they delight in ignoring it and creating a path of devastation in their wake.

How to Play a Chaotic Evil Character

More often than not, chaotic evil characters found in the game are enemies you need to battle rather than members of your own party. However, an experienced player may decide to make their character tend towards chaotic evil.

The fun of creating a chaotic evil creature in Dungeons & Dragons is that you get to be deliciously evil in your quest. Be selfish. Make decisions based on how they will impact you, and don’t worry about other players in the campaign.

You may also want to wreak havoc on the campaign. Throw unexpected challenges at your opponents and attempt to divert them from their mission. Create problems for the sole purpose of watching others panic while trying to resolve them.

Keep in mind that you shouldn’t be evil in real life. The game should be fun for everyone, and if the havoc you cause spoils everyone else’s enjoyment, you may not be invited back. Be sure to limit your evil actions to things that make sense in the in-game universe.

Although you can build your character however you want, a few character classes and races tend towards the chaotic evil alignment. A class is a character’s job, such as cleric or barbarian. Class defines your character’s role in the party. The character’s race, such as elf, giant, or dwarf, gives them specific skills, abilities, and tendencies.

Some of the most intriguing and relatable fictitious villains fit the chaotic evil alignment. Although they may sway towards the neutral at times, their propensity towards misdeeds places them squarely on the side of evil.

Batman’s most iconic villain, The Joker, epitomizes the chaotic evil archetype. He’s the yin to Batman’s yang, the perfect mirror and opposite of the lawful good trope Batman represents.

The Joker delights in wreaking havoc wherever he goes. His ultimate goal seems to be to disrupt Batman, regardless of the cost. He has no qualms about sacrificing people, often in cruel ways, to achieve this goal.

The Dark Night Rises takes The Joker to a whole new level of evil. This Joker isn’t just playing a fun, chaotic game against the bat. He aims to destroy the entire system. Although his methods are evil (no benevolent or even neutral character threatens to blow up thousands of people), his motives are often sympathetic. Most of his actions highlight corruption running rampant throughout Gotham City, leading viewers to question who the true enemy is.

Angelus’s primary mission in life is to hurt people. He considered the emotional turmoil inflicted upon his victims a type of art, often lingering to spy on their reactions. The most heartbreaking example is how he sets Giles up to find Jenny Calendar’s body: lifeless on the bed, surrounded by romantic candles and rose petals.

Season three’s powerful “Amends” showed viewers that toying with people wasn’t an exception Angelus made for his enemies but what he does in general. The businessman haunting Angel’s dreams questioned why Angelus set up his children in their beds as if they were sleeping. This short dialogue scene was a callback to the previous season’s brutal setup but also highlighted Angelus’s depravity.

Although his primary goal was to cause personal chaos, Angelus wasn’t against bringing the entire system down. His quest to awaken Acathla, the demon who would suck the world into a Hell dimension if allowed to rise, highlights his disregard for the human system and desire to thrust the entire world into chaos.

Character alignments provide a baseline for how to play a particular character, but they aren’t unbreakable rules. A genuinely good character is capable of evil, just as evil characters can do good deeds.

Alignments are general rules of behavior that you should consider, but you don’t have to strictly adhere to them when you play the game.