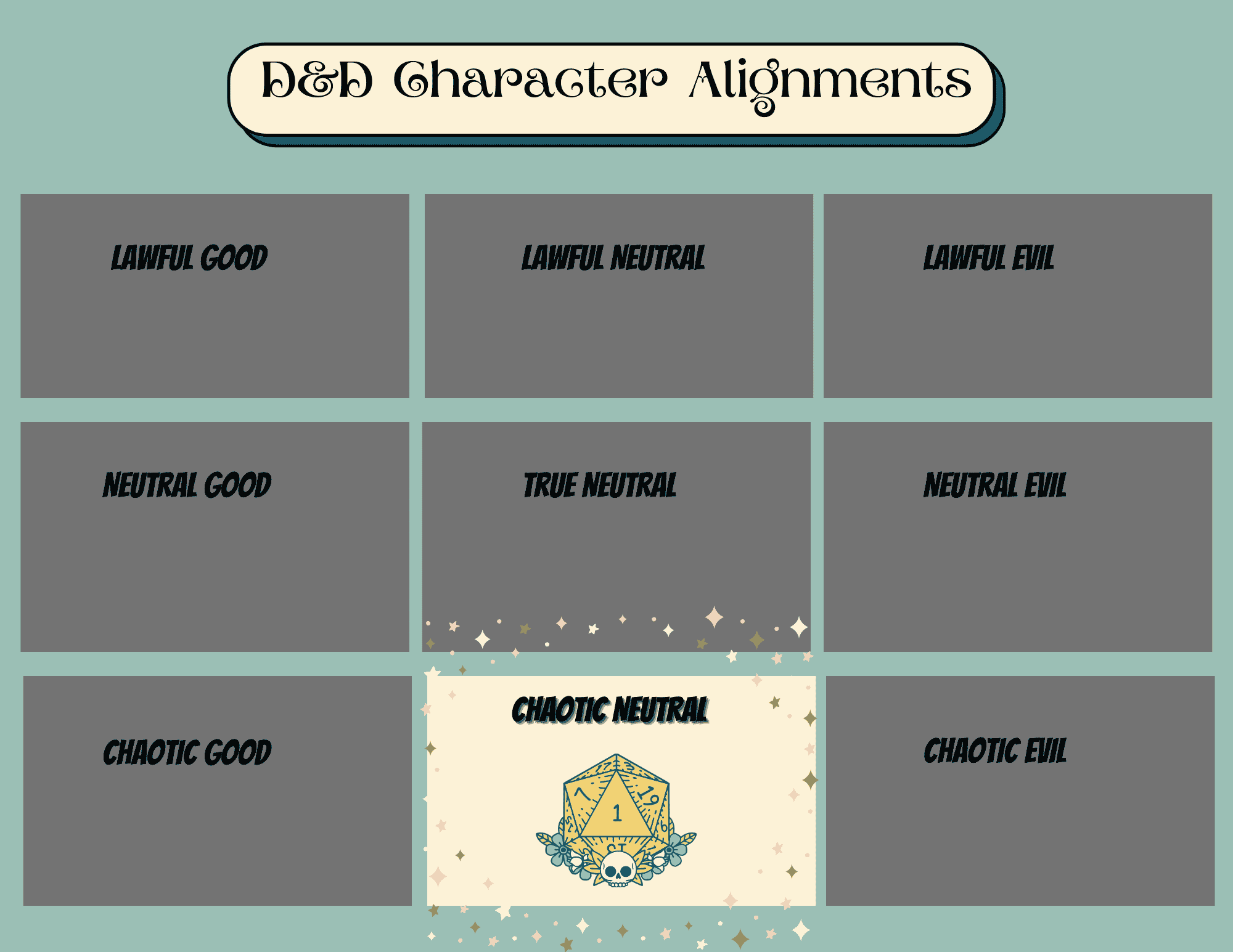 Dungeons and Dragons Character alignment types began as a rule of thumb for building characters to use in the iconic game. However, with the emergence of “nerd” culture, these tropes became engrained in our social awareness and are used everywhere in pop culture, from comics to movies to video games.

Many of the most popular characters in fiction fall under the chaotic neutral alignment.

What is Chaotic Neutral

What Kind of Person is Chaotic Neutral?

The primary motivation of a chaotic neutral character is to accomplish their own personal goals. Whether that be a good goal or an evil goal is secondary. Often these characters mirror chaotic good because their selfish goals align with the hero’s mission.

However, the goal is never to do good for the sake of it. Instead, a chaotic neutral’s goal may be to save someone they love, make money, or rise to the top of their profession.

Chaotic neutral characters value personal freedom above most other things. They don’t want to be told what to do, and they don’t care about society’s rules.

Chaotic neutral characters will do whatever they want, within or outside of the scope of the law. They have no moral compass and will choose actions that they feel will get results.

Although not all characters with this alignment are the same, some common personality traits you might find in chaotic neutral characters include:

How to Play a Chaotic Neutral Character

Chaotic neutral characters are fun to play in role-playing games such as Dungeons and Dragons. To successfully play this type of character in a campaign, you must consider their motivations.

As you are building your character, think about why they would want to be in a campaign. They aren’t evil characters, so they aren’t trying to destroy the world for the sake of it, but they also aren’t good characters and aren’t involved in the quest out of some sense of moral conviction.

Consider your character’s motives, and let that be a guide towards the decisions they make.

Character Classes and Races that Tend to Be Chaotic Neutral

In Dungeons and Dragons and other similar tabletop games, certain races and classes lend themselves to specific alignments. Though any race can be a chaotic neutral, elves and gnomes, tend to lean towards the chaotic more than other races.

Classes that lean towards chaotic neutral include bards, fighters, and barbarians.

Although there are certain races and classes that lean more towards chaotic neutral, most character types can be played with this alignment.

Chaotic neutral characters are some of the most memorable and iconic in fiction. They often toe the line between good and evil and are more relatable than strictly “good” or “evil” characters.

Spike from Buffy, the Vampire Slayer, is an excellent example of a chaotic neutral character. Although a vampire and technically evil, he isn’t motivated by evil for evil’s sake.

Spike is motivated by love. In season two of Buffy, he teams up with the good guys to help save the world because he wants his girlfriend Drusilla back. Season five of Angel further cements that he was motivated by love rather than evil, with flashbacks of his early days as a vampire. He does evil things to impress Drusilla rather than for the sake of them.

His turn to good is also motivated by love. When he falls in love with Buffy, he starts to help the crew fight evil. He doesn’t do it out of a moral imperative to be good, and in fact, he sometimes turns to evil to accomplish his goal of “helping.” His primary motivation for doing what he does is selfishness. He wants his love interest to return his favor and will do whatever it takes to achieve that goal, whether it’s good or evil.

Twitch streamer ComehaveaBagel, who often streams Dungeons & Dragons as a Dungeon Master,  considers the Marvel fan-favorite Deadpool an iconic example of chaotic neutral in action. As a mercenary, he doesn’t follow the code of conduct that other Marvel superheroes embrace. Instead, he does whatever he needs to in order to get the job done.

Deadpool is a complex character, and there is lively debate about where he truly fits in the alignment system. Some claim that he’s chaotic good because he generally works for the good guys, but others think of him as chaotic evil because he doesn’t care who gets hurt unless it’s someone close to him.

Ultimately, character alignments aren’t set in stone, especially in fiction. It’s easy to ensure that you stick to an alignment while playing a game, but a story requires complex characters who grow, change, and develop. Deadpool may fall into numerous alignments during the course of his development.

Character Alignments are a Guide

Like all character alignments, the chaotic neutral alignment is just a guide. It gives us a good baseline for how to play a particular character, but it isn’t the only consideration. A generally good character is capable of evil, just as evil characters can potentially do good things. Alignments are general rules of behavior that you should try to stick to but don’t have to be strictly adhered to.