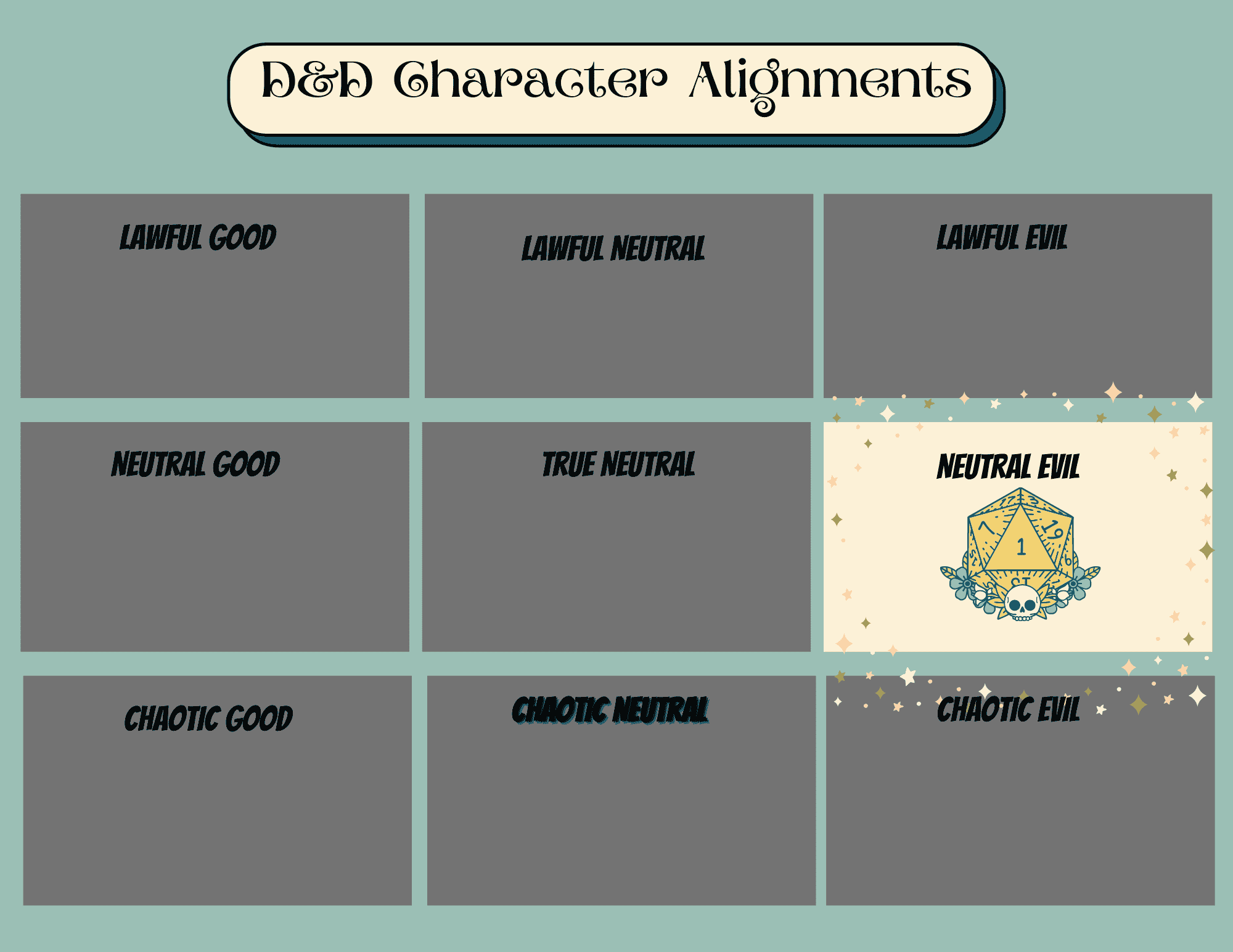 As “nerd” culture became mainstream, these guidelines morphed into useful tropes enabling fans to describe characters in their favorite fictional works, from comic books to movies and even in video games.

Neutral evil villains often lack a greater purpose for their wicked ways. They have no qualms about hurting people if it will benefit them directly, but generally don’t care about creating their own system of misery, like the lawful evils, or destroying the current system and gleefully watching the world descend into chaos, like the chaotic evils.

What Does it Mean to Be Neutral Evil?

Neutral evils are malicious with no greater purpose. They’ll steal candy from babies if it makes them a quick buck.

Most characters with this alignment have no grand plans for world domination and no strong feelings toward the law in either direction. They have no qualms about following beneficial laws or breaking the rules if it suits them.

Although it sounds similar to chaotic neutrals, the difference is that they will choose malevolence for fun if the opportunity arises. Chaotic neutrals won’t hurt people on purpose. They don’t relish in suffering as the neutral evils do, and many chaotic neutrals have a line. They won’t allow the world to burn for their own selfishness. Neutral evils have no such boundaries.

For example, both a chaotic neutral and neutral evil may be assassins. The chaotic won’t enjoy the act of killing and would likely conduct the job quickly and professionally. A neutral evil may delight in the job, dragging it out to inflict as much suffering as possible. A chaotic may also have lines they won’t cross, such as not assassinating a child or not killing innocent people. Neutral evils don’t care who they hurt.

Although all characters are different, with varying goals, dreams, and desires, most neutral evils have a few characteristics in common.

Self-Serving – Will do anything if it benefits themselves

Callous – Unmoved by the suffering of others, and sometimes even enjoy it

Dishonest – Will lie, backstab, or betray to get what they want

How to Play a Neutral Evil Character

While playing a neutral evil character, remember your primary motivation: yourself. Think “me me me” with every decision that you make. If killing another character will help you in your quest, do it with no regrets. Show callousness in your choices because you literally don’t care what happens to anyone else.

The fun thing about neutral evil characters is that they can turn on a dime if the wind suits them. Join a party if it will get you closer to your goals, and betray them in a heartbeat if the situation changes. Lie, cheat, steal, and backstab to get what you want.

It’s important to remember that neutral evils usually don’t do evil just for the sake of it. Yes, they typically enjoy doing malicious deeds, but they won’t cause harm for the sole purpose of disrupting a mission. There has to be something in it for them.

Consider your character’s primary motivations, goals, and desires. Every decision you make in-game should help you achieve those end goals, regardless of the consequences to anyone else.

Character Classes and Races that tend to be Neutral Evil:

Although you can build your character however you want, a few character classes and races tend towards the neutral evil alignment. A class is a character’s job, such as cleric or barbarian. Class defines your character’s role in the party. The character’s race, such as elf, giant, or dwarf, gives them certain skills, abilities, and tendencies.

Drow (a sort of dark elf), yugoloths, and cloud giants tend towards neutral evil, as do assassins, henchmen, and mercenaries.

Neutral evil characters are often hard to point out in fiction and literature. Many times, the henchmen, mercenaries, and assassins fit this mold, most of which are side characters without a lot of development.

Main characters who lean towards neutral evil may also display chaotic or lawful evil characteristics as the story progresses. A compelling aspect of fiction is that most characters don’t perfectly fit any mold; they grow and develop as a story unfolds.

However, there are a few fictional examples we can point to that showcase the traits and behavior of neutral evil characters.

Most character alignment charts put the evil goddess from Buffy the Vampire Slayer squarely into the chaotic evil alignment, but I disagree. Although her actions may seem crazy and chaotic to the viewer, she’s not motivated by wreaking havoc and causing chaos. Her primary motivation throughout the season is finding a way back to her home.

Many fans consider this Glory’s brain-sucking evidence of a chaotic evil alignment due to the havoc it wreaks, but I disagree. When considering alignments, it’s important to remember a character’s motivation. Sucking someone’s brain may leave them a chaotic mess of themselves, but that’s not Glory’s goal. She only does it when she needs to feed.

Glory’s first interactions at the Magic Box, when she purchases ingredients for a spell, highlight her neutral evil tendencies. At this time, she has no reason to suspect the Magic Box is working with the Slayer, and she behaves like a regular customer when she goes.

A chaotic evil would suck a brain in the magic shop just for fun, but Glory doesn’t. She purchases her ingredients, makes small talk with Giles while he’s ringing her up, and then leaves. The entire transaction was utterly uneventful.

Glory’s actions here are selfish. It was easier for her to simply buy the ingredients like an everyday customer than to draw attention to herself by causing chaos, so that’s what she did.

The Hobbit’s iconic dragon villain is evil. He hordes his treasure and burns the village to the ground with zero regard for the lives lost.

Smaug is the perfect example of neutral evil. He has no grand plans for world domination and is not out to revel in anarchistic destruction. All Smaug cares about is his gold, and he will destroy anyone or anything that comes between him and it.

It’s not inherently evil to guard your wealth, but we can’t pretend Smaug acquired all this gold through legal means. We know Smaug stole the gold and viciously attacks anyone who tries to stop him or take it back.

The dragon’s selfish actions and callous disregard for anyone else highlight the neutral evil alignment.

Our favorite background characters from most movies and shows tend towards the neutral evil alignment. Most henchmen don’t care about the main villain’s master plan. They neither strive for world domination nor desire anarchy.

They only care about who pays the most, and if the world ends as a result, well, at least they got theirs.

Character alignments are general rules of behavior you should consider when planning a character, but you don’t have to strictly adhere to them while playing. The best characters are complex, embodying a blend of alignments or changing over time. Your character can be the same.