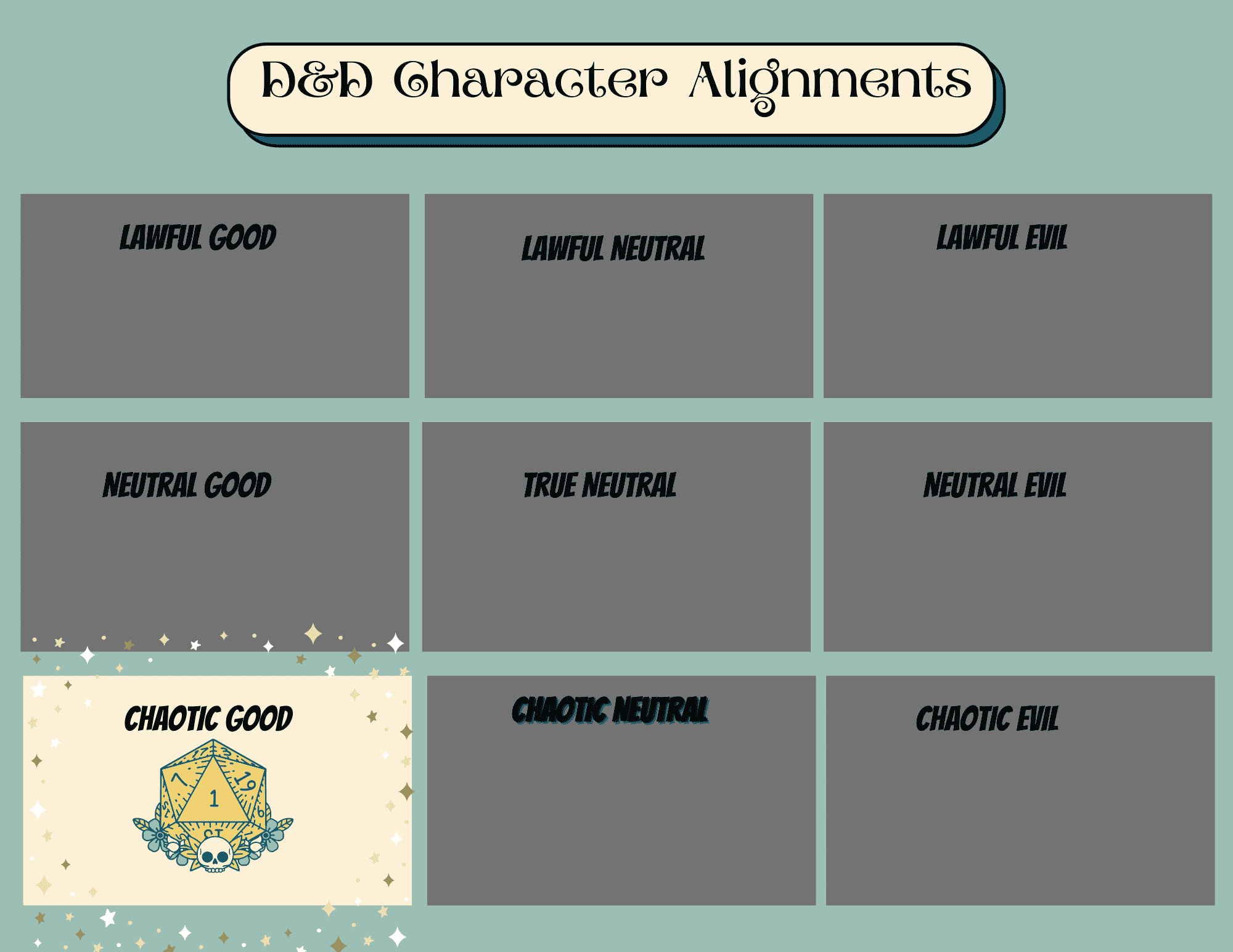 Dungeons and Dragons character alignments give players ground rules for building characters for the tabletop game. With advancements in “nerd” culture, these tropes became helpful ways to describe characters in all kinds of fiction, from comics to movies to video games.

Chaotic good is a popular character archetype that many people recognize in their favorite fictional heroes.

What Does it Mean to Be Chaotic Good?

Chaotic good characters are generally good people. They always do what they believe is right, regardless of consequences or laws. In fact, they tend to see laws as oppressive and think that the right thing is abolishing most laws so that people can be free to choose their own paths.

Chaotic goods value freedom and personal liberty. They believe people are ultimately good and will do the right thing if given the opportunity. In addition, they believe that most laws are oppressive and take away an individual right to choose their own destiny.

Characters falling under the chaotic good alignment aren’t just in it for themselves. They want to do the right thing and help people become the best versions of themselves. They have no qualms about standing up against tyranny wherever they see it.

Therefore, you will often find chaotic good characters fighting against a corrupt government or standing up for the little guy.

How to Play a Chaotic Good Character

The main point to remember when playing a chaotic good character is they will follow their conscience rather than the law when making decisions. The law is unimportant. The important thing is what’s right versus wrong.

Play a chaotic good character as if there is no law. Let your conscience be your primary guide in all the decisions you make. Do the right thing, regardless of the rule of law.

Character Classes and Races that tend to be Chaotic Good

Although you can build your character however you want, a few character classes and races tend towards the chaotic good alignment. A class is a character’s job, such as cleric or barbarian. Class defines your character’s role in the party. The character’s race, such as elf, devil, or dwarf, gives them specific skills, abilities, and tendencies.

Copper dragons, unicorns, and a variety of elves are races that tend to align with chaotic good.

It’s important to remember that most fictional characters don’t fall neatly into a character alignment. Great works of fiction have characters that grow and develop, make bad choices, and learn from those choices. A character who maintains their alignment throughout a show or movie ends up being one-dimensional and rather bland.

However, some characters in fiction make great examples of chaotic good, even if they don’t fit the mold 100%.

Demolition Man is an old action-comedy from the 1990s but has one of the best portrayals of a chaotic good character in fiction.

“You see, according to Cocteau’s plan, I’m the enemy, ’cause I like to think; I like to read. I’m into freedom of speech and freedom of choice.”

Edgar Friendly is the hesitant leader of the underground rebels. His group rejected San Angeles’s strict regime of law and order, where anything considered unhealthy (salt, physical contact) was deemed illegal. He never wanted to lead but stepped up when the group saw him as a leader.

Friendly chose to live in the sewers where he could be free rather than live in an oppressive regime. He broke the rules to feed his people, stealing and pillaging food when they needed it. When the opportunity arose, he didn’t hesitate to join the battle against society because he knew that rules which restricted people’s ability to choose their path were inherently wrong.

There is a lot of argument in the Buffy fandom about where Rupert Giles falls on the Dungeons and Dragons Character alignment system, but his actions on multiple occasions throughout the series show that he’s chaotic good.

Giles is righteous, and you’d probably consider him lawful good when you first meet him. He’s the stuffy school librarian, a member of the lawful Watcher’s Counsel, and constantly tells Buffy she needs to follow the rules of being a slayer.

But when you look closer, you see that much of his behavior is questionable. He does what he thinks is right and uses the rules to do it if it suits him. However, he also has no problem breaking the rules for what he believes to be the greater good or if it’s the right thing to do.

His chaotic nature truly comes to the forefront in season 7 when he goes behind Buffy’s back to attempt to kill her biggest ally. In this case, Buffy, as the leader of an army, is considered “the law,” and Giles works against the law to do what he feels is right.

Although we only glimpse Giles’ youth as “Ripper,” we can infer that he was chaotic neutral back then, doing what he wanted and rebelling against authority. We don’t know how or when he turned into a stuffy librarian, but it’s fair to say his chaotic side didn’t disappear; it was only reigned in.

A case could be made for Giles to fall under neutral good. He does obey the laws when he feels they should be obeyed. This is a wonderful example of a complex fictional character that doesn’t fall neatly into a character alignment box.

Character alignments give us a good baseline for how to play a particular character, but they aren’t the only consideration. A genuinely good character is capable of evil, just as evil characters can potentially do good things. Alignments are general rules of behavior that you should consider but don’t have to be strictly adhered to.