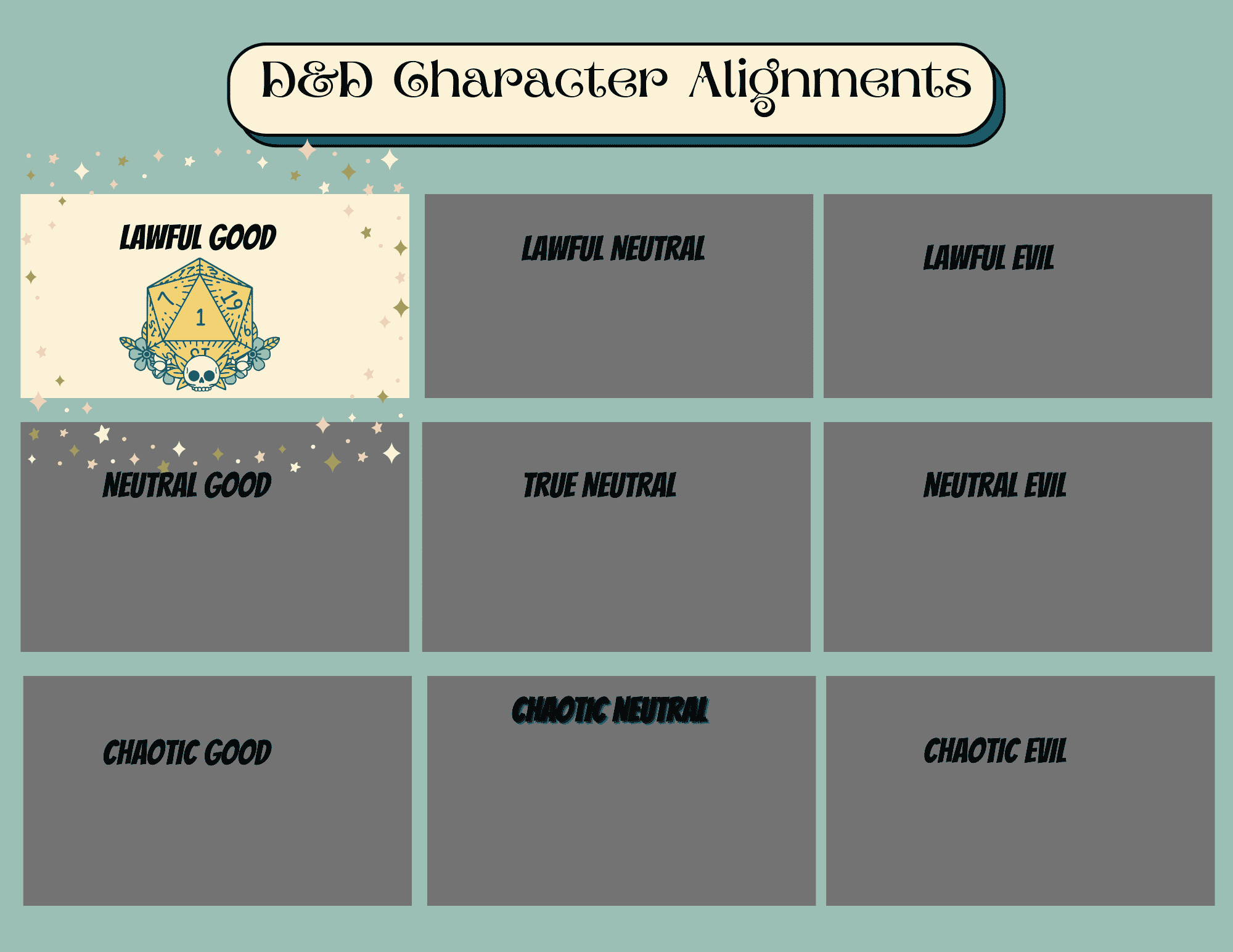 Dungeons and Dragons Character alignment types can help players of the iconic game build characters that follow specific guidelines. With the rise of nerd culture, this alignment system became more popular and widely used to describe characters in many fictional works.

Lawful good characters are the heroes in many stories, though their strict adherence to rules and laws can lead to their downfall.

What Does it Mean to Be Lawful Good?

Lawful good characters genuinely want to do the right thing and believe that the law is fair.

Both internal and external morality guides lawful good characters. They believe that laws were made for a reason and are typically driven by obedience to authority.

Freedom Ironbullet is a Twitch streamer specializing in Starfinder, a game that uses the same character alignment system as Dungeons and Dragons. He describes a lawful good character as one with a strong moral compass who prefers to follow the rule of law but who isn’t afraid to fight against injustice. They have benevolent ideals and want to use their power to better humanity. They work towards what they believe is right.

Selfless – They value the greater good above their own lives

Kind – Being nice to others is the right thing to do

What is Neutral Good Versus Lawful Good?

The lawful goods believe that rules, law, and order are fundamentally sound and will do their best to work within the confines of the law. Their adherence to the law means they may punish a thief trying to feed their family because stealing is against the law and thus wrong.

Neutral goods care more about their internal compass and compassion than the law. They don’t hate the law but often have their own code that they follow, separate from the law. A neutral good may let the thief go because ensuring an innocent family doesn’t starve is more important than following the letter of the law.

How to Play a Lawful Good Character

If you choose to play a lawful good character, you need to understand their motivations. These characters strive to do good and make the world a better place, but they want to stick within the framework of law to achieve this goal.

Law and good aren’t always the same. When playing this character, be careful not to get sucked into the habit of always following the law. If you do this, your character may become too robotic, predictable, and machine-like, which can suck the fun out of it.

Instead, focus on the good part, and consider what your character might find morally right. Try to achieve the ethically correct outcome while sticking within the confines of your in-universe laws. Use your powers for good and help people, but also arrest criminals and maintain a belief that the justice system is righteous. You’re not a rebel. You believe in law and order and should make all your decisions inside that framework to the greatest extent possible.

As with most characters, adaptability is essential. Though you should attempt to be heroic while adventuring, some circumstances may call for a change in strategy.

Character Classes and Races that tend to be Lawful Good:

Although you can play any character in any way, certain classes and races lend themselves to different alignments. A class is a character’s job, such as cleric or barbarian, and defines your character’s role in the party. The character’s race, such as elf, druid, or dwarf, embodies them with specific skills, abilities, and tendencies.

Classes such as Paladins and Clerics are generally considered lawful good, as are races such as dwarves and golden dragons. However, the general rule doesn’t always hold up. You can’t assume a Paladin is lawful good even if they typically are.

Fictional characters don’t always fit neatly into boxes of character alignments. There is generally nuance to each character, and they often grow and change over time, traversing numerous alignments. That said, there are still some good, if not perfect, examples of lawful good characters in fiction.

In early Buffy, Willow is caring, honest, kind, and driven by a desire to help people. When you first meet her, you can tell that she’s a good person. She has a strong sense of morality and even gives up attending a great college because she believes saving people’s lives is more important.

Willow embodies the lawfulness of the lawful good alignment with her strict adherence to the rules. She feels guilty over breaking even the most minor school rules, like leaving campus, and cries over something as silly as breaking the school’s crayon.

Freedom Ironbullet believes Marvel’s Captain America truly embodies the lawful good archetype. He fights for his country, selflessly serves others, and always puts the good of his country above all else.

There is a lot of debate about whether Captain America is lawful good or neutral good. As with all fictional characters, sticking to a specific alignment is complex. Characters usually have more than one motivation, often changing over time.

Captain America is complex, but his morality doesn’t change. Although he likes the rule of law and will typically follow it, his inner sense of justice will win out. He will not follow or enforce a law if he doesn’t consider it “good.” He will fight against evil laws, even if that means going against everything he believes in.

This trait doesn’t mean he’s neutral, though. He still cares about law and order but seeks to instill and enforce just laws that will make his country a better place. A neutral wouldn’t care about the law. Captain America cares deeply about it. He prides himself in upholding the law when he believes it’s just.

Character Alignments are a Guide

These alignments give us a good baseline for how to play a particular character, but they aren’t the only consideration. A generally good character is capable of evil, just as evil characters can potentially do good things. Alignments are general rules of behavior that you should try to stick to but don’t have to be strictly adhered to.