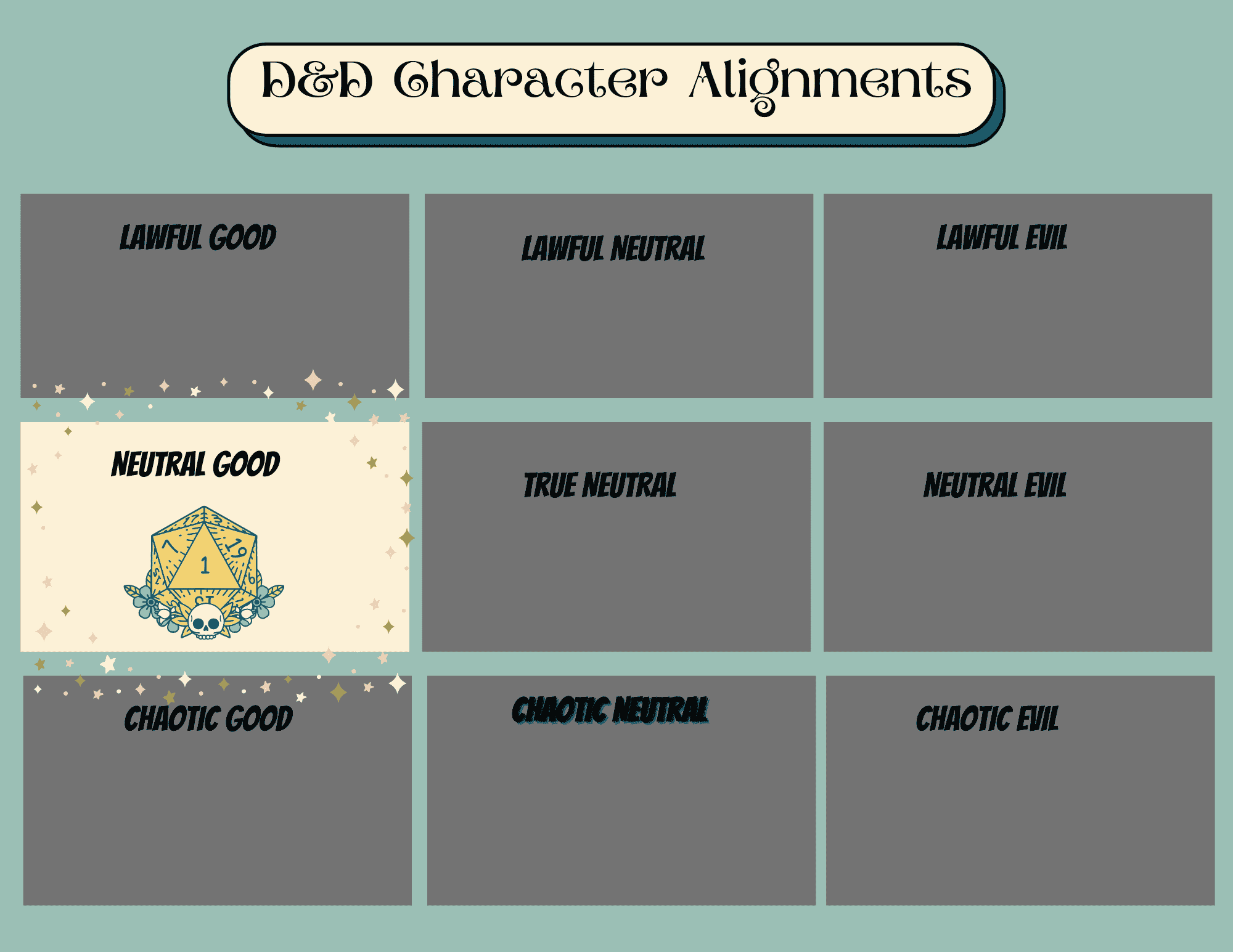 Neutral good characters are the good guys who toe the line between doing the right thing and obeying the law.

What Does it Mean to Be Neutral Good?

In normal, non-dystopian societies, laws protect the public good. Lawful goods work to maintain law and order in these works. Chaotic goods won’t have much to dismantle, limiting their roles in these stories.

In dystopian fiction, laws oppress and subjugate. Chaotic goods thrive in stories like this, breaking down systems and freeing the populace.

The stark contrast makes it easy to understand the differences between chaotic good and lawful good characters.

Neutral goods are a little harder to pin down. To them, laws are neither good nor bad. They don’t have strong feelings about breaking or maintaining the law.

As good people in general, a neutral good will obey most laws in a normal society. However, they won’t hesitate to break a rule for the greater good. The difference between neutral goods and chaotic goods is that for neutrals, breaking the law is a side effect, and more often than not, abolishing unjust laws is the point for chaotics.

Neutral good characters are genuinely good people. They truly believe that good should triumph over evil and that humans are ultimately on the side of good. However, they don’t wear rose-colored glasses.

Neutral goods are keenly aware that some people are evil and good intentions often lead to unintended consequences. Because of their innate understanding of how the world works, neutral good characters realize that the law isn’t perfect.

Although these characters have no strong feelings towards the law, they will generally follow it unless it’s evil. However, they aren’t bound by it. Neutral goods will break the law to do the right thing without hesitation, but breaking the law is rarely the point of their actions.

How to Play a Neutral Good Character

The most important thing to remember when playing a neutral good character is to do the right thing. Consider what will help the most people, what will defeat the evil, and what will help your crew.

The rules and the law shouldn’t be a crucial part of your decision-making, but in a just society, neutral goods will try to stay in the law if they can help it. However, these characters realize that laws have limits and will always prioritize defeating evil over keeping in line with the law.

Character Classes and Races that tend to be Neutral Good

Although you can build your character however you want, some character classes or races tend towards the neutral good alignment.

A class is a character’s job and defines their role in a party, while their race gives them specific skills, abilities, and tendencies.

However, many characters showcase the traits of neutral good characters, even if they don’t always fit neatly into the box.

Here are some great examples.

Buffy Summers, the title character of the iconic show Buffy the Vampire Slayer, is the epitome of neutral good. She is good for the sake of good, not because there are rules that tell her she should be. Buffy usually follows the rules, but she won’t hesitate to break an unjust law.

A great example of Buffy’s neutral good nature comes in season 4. Buffy’s world is juxtaposed with a military world, which in theory is lawful good. The soldiers obey their commands without question, believing the rules and law to be righteous because they are fighting monsters.

Buffy, on the other hand, questions all of the orders. She refuses to wear camo and refuses to kill a harmless monster, despite the military’s rules. She values her own sense of ethics and morality more than the law and knows that the law isn’t always perfect.

Throughout the series, Buffy displays neutral good behaviors and ideals. Although she generally followed the rules of the Counsel in the early seasons, she quit when she realized their methods were sexist and designed around control. She often works outside the rules in her battle against the forces of evil.

Another example of neutral good characters in fiction is the sidekicks and one-off characters. Often, superheroes will enlist the help of a trusted friend, a wise sage, or an ally with specific skills to help them in the ultimate quest against evil.

The enlisted assistants were so wrapped up in their own lives that they didn’t worry about the pending evil. However, upon being asked to do the right thing and get involved, they will.

Side Kick characters showcase a unique aspect of the neutral good alignment: neutrality. Unless directly asked to get involved in a situation, they won’t. They stay neutral. However, because they lean towards good, they can’t turn down a request for assistance, especially in a battle against evil.

Character alignments offer a baseline for how to play a particular character, but they aren’t perfect. Good characters are capable of evil, and evil characters can do good things.

Alignments are general rules of behavior that guide Dungeons and Dragons players in their decision-making process. However, the choice is ultimately up to the player. You don’t need to stick to the character alignment framework in every decision.

Choose the path that makes the game most fun for you, and enjoy your adventure!