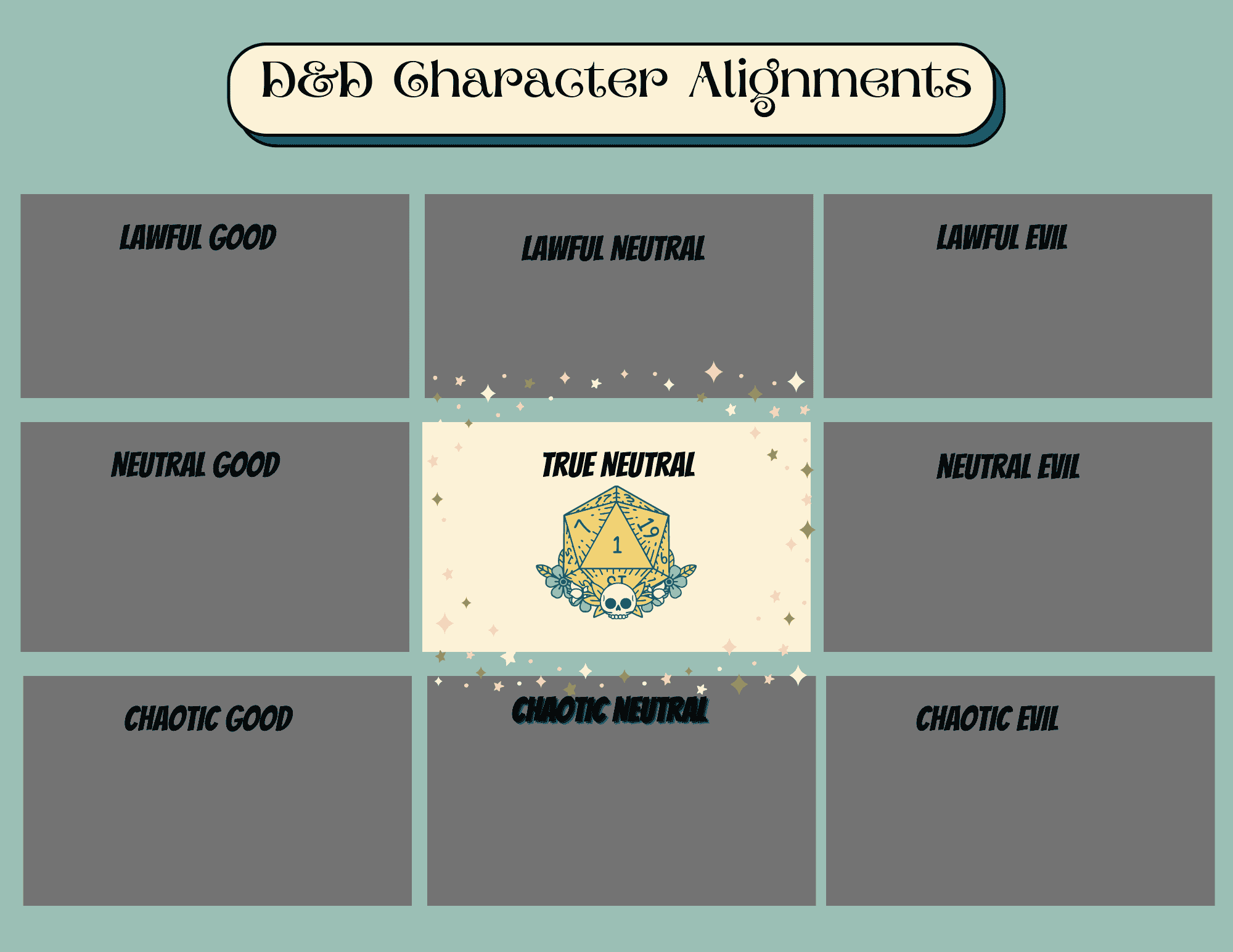 Dungeons and Dragons character alignments are a rule of thumb for building characters for use in the tabletop game. With “nerd” culture on the rise, these tropes became helpful ways to describe characters in pop culture, from comics to movies to video games.

True neutral is one of the most complicated archetypes to imagine, play and create in fiction.  However, this short guide can help you understand what it means to be genuinely neutral.

What Does it Mean to Be True Neutral?

True neutral characters are neither good nor evil. They don’t care about the law but aren’t out to disrupt it. True neutrals can either be indifferent to the law or feel that it doesn’t apply to them.

Darren Bogus, a D&D player from Austin, Texas, considers true neutral characters serene masters of their environment who are above the notions of good and evil. Neutrals see these moral choices as social and cultural constructs which go against the natural order.

How to Play a True Neutral Character

Jimmy Watts, CEO of Own the Grill and long-time Dungeons and Dragons enthusiast, always chooses neutral characters. He considers them the bridge between party members and NPCs and listens to all sides of an argument to come to a workable solution. Watts plays the neutral character as a sort of devil’s advocate, helping his campaign see problems from different perspectives.

Character Classes and Races that tend to be True Neutral

Although you can build your character however you want, a few character classes and races tend towards a true neutral alignment. A class is a character’s job, such as a cleric or barbarian. Class defines your character’s role in the party. The character’s race, such as elf, devil, or dwarf, gives them specific skills, abilities, and tendencies.

It’s important to remember that most fictional characters don’t fall neatly into a character alignment. Characters in fiction should grow and develop, make bad choices, and learn from those choices. A character who maintains their alignment throughout a show or movie is often bland.

However, some characters in fiction make great examples of true neutral, even if they don’t fit the mold 100%.

Willy from Buffy the Vampire Slayer/The Host from Angel

The first few seasons of Buffy the Vampire Slayer feature a demon bar with a human barkeep named Willy. Willy is slimy and often appears to protect his demon patrons, but he also gives Buffy information when she needs it. His ultimate goal is to run the bar without any trouble. He doesn’t care that the demons go outside and hurt people or that Buffy is fighting demons. All he wants is to ensure his bar remains open and neutral.

The spinoff Angel expanded on the concept of a neutral bar. Lorne, affectionately called “The Host,” owns a bar open to all demon kind, with the strict rule that no harm can come to patrons inside the bar. He even goes so far as to magically enchant the bar to prevent violence from happening inside. Lorne doesn’t concern himself with what happens outside the bar, but he wishes to keep his bar a neutral space for demons.

In later seasons, Lorne shifts to a more neutral good alignment, joining Angel’s team and fighting evil in his way.

Here is where the true neutral alignment can get interesting. The horrifying villains of one of the most iconic science fiction horror franchises of all time are, in fact, true neutral.

The xenomorph from Alien is a terrifying, powerful, relentless killing machine. They hunt humans and use them as incubators for their young. On the surface, they seem like the epitome of evil.

But, if you look a little deeper, you’ll see that they aren’t actually evil. Xenomorphs have no moral compass and no laws. They are animals, killing because their life cycle demands it, not because they enjoy evil. We don’t consider lions evil for killing zebras. Lions kill zebras because they need to eat.

Humans also do awful things to other animals for the sake of survival, and we have a moral compass. Some humans consider our factory farming and animal slaughter activities morally wrong, but it’s a small group, and we are one of the only species who can even ponder whether it’s right or wrong.

Xenomorphs don’t have that. They follow their natural order and kill out of instinct. Their lack of morality and natural behavior makes them truly neutral, even though their actions are detrimental to humans.

Character alignments give us a good baseline for how to play a particular character, but they aren’t the only consideration. A genuinely good character is capable of evil, just as evil characters can potentially do good things. Alignments are general rules of behavior that you should consider but don’t have to be strictly adhered to.

The fun part of Dungeons and Dragons is that you can choose your own path, even while using the alignments as a guide.